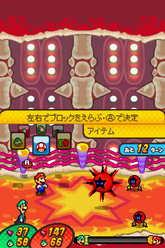 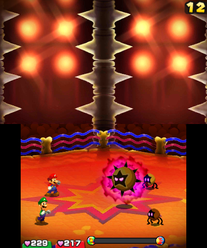 The Gauntlet allows Mario and Luigi to face harder versions of seven bosses that they have battled over the course of the game; the Emoglobin near the entrance explains that they mined the Bros.' memories to create stronger versions of bosses previously encountered. All of the boss rematches are denoted with the letter "X" (e.g. Durmite X for Durmite), and use faster and more powerful variants of attacks from their base movesets. In Mario & Luigi: Bowser's Inside Story + Bowser Jr.'s Journey, Giant Bowser's bosses can be refought here as well; they are also faster and more powerful, and no mushrooms appear during the battles.

After selecting a class, the Emoglobin menu offers an opportunity for Mario and Luigi to review the battle's rules and switch their badges, even if the Bros. should enter this area before receiving them from Princess Lipid; switching badges will reset their in-battle meter. Upon starting the class, the Emoglobin either creates or transforms into the boss in question, and the battle begins. Each fight takes place in a boxing ring-like arena that can be seen in the background of the pre-battle menu. The battle must be cleared in a certain amount of the Bros.' turns, displayed both in the pre-battle menu and on the screen during battle; if this turn counter expires or both Mario and Luigi are KOed, they lose and are forced to try again. Defeating the boss rewards the Bros. with a coin payout equal to five times the starting price in the original; in the remake the payout is reduced to three times the price, but they are also rewarded with an additional item. A trophy of the boss is also displayed on the top screen in the class selection menu. The Giant bosses in the remake reward twice the amount of coins paid alongside gear for Bowser, and have no turn limits.

The seventh class is only unlocked when the other six are cleared, featuring a boss rush of all six previous classes and culminating with Bowser X as the seventh and final battle in the set. In the remake, defeating Bowser X also unlocks the songs "The Grand Finale", "Battle Time!" and "A Journey to Remember" in the music player.

*Player must beat all previous classes in order to unlock.