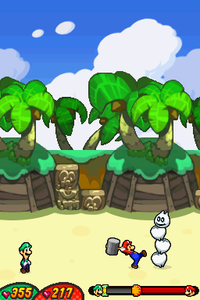 Mario about to hammer a Toothy

Toothies are Pokeys made entirely out of teeth that are found in Mario & Luigi: Bowser's Inside Story. These enemies are encountered in Plack Beach. They attack by charging at the player one to three times. If they have no body, they summon a Blue Virus with a spear in their mouth and have it charge at the player. If Bowser is in a battle with a Toothy, the virus will jump en route. He simply has to use his punch on the Blue Virus in midair when it come close to him. If Mario and Luigi are in a battle with a Toothy, its charge attack is deflected with the hammer. If it spits out a Blue Virus, the virus will either stay idle or hop. If it stays idle the Mario Bros. must jump, but if it hops as it pulls its spear out, Mario and Luigi must not jump. In addition getting hit could result in getting the Poison status effect. Toothies can also rebuild their bodies. Dealing damage to their bodies does not cause damage, however dealing damage to the head will. With one Hammer swing or Bowser's punch, the player can wipe out the entire body, leaving the head stuck in the ground. If Bowser inhales the teeth that make up Toothy's body, he can increase his defense and also make the Toothy vulnerable, as it can no longer rebuild its body. Bowser's flame will not do any damage or take out a Toothy's body.

Bowser can use the Vacuum Block to inhale a Blitty from a Toothy after visiting Broque Monsieur's shop for the first time.

Toothies reappear in Mario & Luigi: Bowser's Inside Story + Bowser Jr.'s Journey, where they also appear in the Bowser Jr.'s Journey mode as enemies. They are melee troopers, and are weak to boomerang attacks from Boomerang Bros. and Wendy. In the Mario & Luigi: Bowser's Inside Story mode of the game, they take 0 damage upon getting hit with a First Strike on either using Bowser's punch or the Bros.' hammers, as the strike will be redirected towards their body. Bowser's flame now makes them take normal damage rather than 0 (aside from the First Strike itself).