Shell Mario and Shell Luigi[1] (also known as Koopa Mario and Koopa Luigi[2]) are the forms of Mario and Luigi that they take by wearing a Blue Shell. The form debuted in New Super Mario Bros., and allows them to use their shell offensively or defensively. 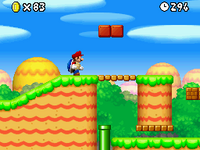 In New Super Mario Bros., this form lets Mario swim faster and with more accuracy, and gives him the Hammer Suit-like ability to dodge the attacks of enemies when he crouches. As long as he keeps ducking, he is safely protected from most enemies, but it will not protect him from Bob-omb explosions, Spiked Balls, hammers thrown by Hammer Bros. or Sledge Bros., boomerangs from the Boomerang Bros., and the volcanic debris from World 8-8.

If Mario runs for a short time, or crouches while on a downward slope, he slides in the shell through the level. This maneuver is called a shell dash. This move is extremely powerful, as Mario can defeat enemies such as Thwomps and Boos while doing so. However, the shell dash mechanics also make it almost impossible to Triple Jump, while Double Jumping becomes harder to perform, because the player must make the second jump while running but before Mario goes into the shell to slide.

Shell Mario returns in Mario & Luigi: Bowser's Inside Story and its 3DS remake. The power-up is first acquired in the skies of Toad Town, where it was introduced by the Koopa Paratroopa Trio. Mario can turn into Shell Mario by striking Shell Blocks (which were spread around the Mushroom Kingdom when Mario and Luigi hit a giant version of them back in Toad Town). Luigi can then hit Mario using his hammer, and this makes Mario go into the shell, spinning straight in the direction he was facing. This can be used to hit blocks and platform-moving levers in areas which Mario and Luigi cannot directly go into, and hit enemies in the field to stun them. However, because the shell is so heavy, Mario is unable to jump in it. If he does, he loses the shell. It serves a similar purpose to Kooper and Koops's field abilities in the Paper Mario series.