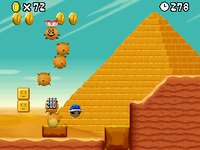 Mario shell-dashing to defeat a Pokey

The shell dash[1] is a move that Mario and Luigi can perform by entering a shell and sliding around in it; it can be used in New Super Mario Bros. and Super Mario 3D World. As the player dashes, they defeat enemies and bounce off walls. In the games' multiplayer modes, any other players hit by this move power down or lose a life, depending on their form.

The shell dash is introduced in New Super Mario Bros. and can be performed only if the player is in their shell form after collecting a Blue Shell. It can be performed by running for about two seconds or crouching on a slope. After doing so, Mario or Luigi ducks into his shell and dashes as fast as a moving Green Shell or Red Shell. Mario or Luigi can jump while using this move, as well as hit or break blocks (off which, alongside walls, they ricochet) and defeat enemies; it takes three shell dash hits to defeat most bosses. Unlike when kicking a Koopa Troopa's shell and hitting multiple enemies to earn increasing points and extra lives, Mario or Luigi earns only 200 points for every enemy defeated when using a shell dash.

There is a similar move in Super Mario 3D World and its Nintendo Switch port. If the player crouches while holding a Green Shell, they will duck into the shell and dash; they will remain idle if standing still in the Wii U version, whereas the Nintendo Switch version requires using the touch cursor to do so. Unlike in New Super Mario Bros., one can earn increasing points and extra lives with this move. The player can exit the shell any time; if they do so, they will do a Spin Jump. However, the player's character automatically exits the shell after a while, becoming dazed and stunned for a few seconds. If a player touches the Goal Pole while using this move, they will get an extra life.

In Bowser's Fury, Fury Bowser uses his own version of the shell dash, which involves him tucking into his shell and rolling at Mario from the side of his carapace, rather than have his shell lie flat on the ground. When he does so, he leaves behind a trail of goop, and if Giga Cat Mario claws his shell or long-jumps into it, he can be ground-pounded.