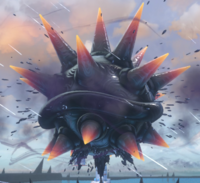 The Fury Sun just before Fury Bowser wakes up

The Fury Sun[1] is an object that appears in the Bowser's Fury campaign of Super Mario 3D World + Bowser's Fury. It sits in the middle of Lake Lapcat as a spiky blob of goop that resembles Bowser's Spike Ball form in Mario & Luigi: Bowser's Inside Story and the Super Mario Galaxy games, as well as the spiky shells that Bowser throws in his Super Mario Odyssey battles. Fury Bowser sleeps in the Fury Sun when he is not actively rampaging.

During gameplay, the Fury Sun slowly rises from the large mass of black goop found at the center of Lake Lapcat. As it rises, it will begin to spin slowly, eventually starting to spin rapidly before quickly launching into the air. When this occurs, it starts raining and ominous music plays to signify Fury Bowser is about to become active and start his rampage. Each time Fury Bowser becomes active, a cutscene plays, showing him bursting out from the Fury Sun. This usually happens at intervals of roughly six minutes, but scanning any Bowser amiibo in the game causes him to appear instantly.[2]

After some time, or if the player collects a Cat Shine, Fury Bowser stops attacking and retreats back into the Fury Sun to recover. If this occurs due to time passing, Fury Bowser will retreat during gameplay, but if a Cat Shine is collected, a cutscene will play showing the Cat Shine causing a nearby lighthouse to activate or shine brighter, and the light forcing Fury Bowser to shield his eyes and retreat. If the player enters a Cloud Cannon or a golden Warp Pipe during Fury Bowser's rampage, when they exit from the sub-room, Fury Bowser will appear back in the Fury Sun without having retreated. If a rampage begins while the player has at least 47 Cat Shines,a Fury Bowser will not re-enter the Fury Sun (signaled by one of the Cat Bells saying that his power has grown too strong) until the final battle sequence ends, the credits are viewed, and the player re-enters the campaign from the title screen.

A small pillar in the Ruins region stands near the center of Lake Lapcat, and if Mario stands on it, the camera will pan towards the Fury Sun. However, if Mario attempts to come in contact with the Fury Sun, an invisible barrier will prevent him from touching it, and he will take damage from the surrounding goop. The mass of goop the Fury Sun rests in is marked on the center of the map in the menu, and is the only goop to not disappear from the map after all Cat Shines are collected.

a - If the player has not fought Fury Bowser three times, when the player collects 47 Cat Shines, nothing will change.