“Livin' Large: The Mega Mushroom transforms Mario into an impervious behemoth who obliterates every enemy or obstacle in his path.”
—New Super Mario Bros. official website

Mega Mario is a form that Mario and some other characters can take by obtaining a Mega Mushroom in many games and media. This form allows players to grow into an enormous size, allowing them to destroy every enemy in their path and obliterate almost anything (including Pipes, Goal Poles, Empty Blocks, Boos, and Hard Blocks).

In the film Super Mario Bros.: Peach-hime Kyūshutsu Dai Sakusen!, Mario becomes giant after he uses the Super Mushroom, in which he defeats various enemies using this form. 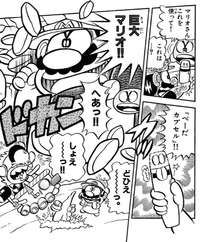 In the Mario vs. Luigi mode of the New Super Mario Bros. arc, Luigi tries to get the upper hand on Mega Mario, but he uses his smaller size and greater speed to beat him.

In the Super Paper Mario arc, Mario, Bowser, and Peach use the power of the Pure Hearts to defeat Super Dimentio in their Mega form, without the use of a Mega Star.

In the minigame Toadstool Titan of Mario Party 3, characters could grow giant by obtaining the Mushroom hidden in one of the several Brick Blocks every round. Once the character had obtained the mushroom, they were capable of knocking out other characters in a short period of time. Mega characters cannot jump and control their moves, however, instead charging in the direction they are facing.

In Mario Party: Star Rush, in the Boss Battle minigame Bowser's Space Race, when the player takes the Mega Mushroom, they grow to score more points.

The Mega form returns with Toadstool Titan (now renamed Mush Pit) in Mario Party: The Top 100. In this version of the minigame, the Mushroom is replaced by a Mega Mushroom.

In Paper Mario: The Thousand-Year Door, Mario or his partners can become huge by using a Power Punch. This increases their attack power briefly for a few turns. During a few Bowser intermissions, if he eats enough Meat, it has the same effect as a Mega Mushroom and makes him huge, invincible, and destructive for a brief time. Princess Peach can also swallow a potion that makes her momentarily giant, although no other effects are seen.

In Super Paper Mario, when Mario, Luigi, Princess Peach, or Bowser collect a Mega Star, they will turn into giant versions of their 8-bit sprites from Super Mario Bros. (Mario and Luigi use their Small form sprites). As Mega Mario, Mario will be able to break any Brick Blocks, Pipes, and enemies in his path, as in New Super Mario Bros.. Mega Mario and Luigi are shorter and faster, while Peach and Bowser are taller but slower. In Chapter 3-1, there is a specific Koopa Troopa that uses a Mega Star, causing it to become the Mega Koopa. According to The InterNed, the music plays while one of the characters is in Mega form (including the Mega Koopa) is titled "An Unrivaled Battle".

Additionally, by feeding Princess Peach a Red Apple while she is in her comatose state, she momentarily grows to a giant size.

In Paper Mario: Color Splash, Mario can enlarge himself in battle by using the Magnifying Glass thing card, which lets him trample over enemies. He also does so as part of his performance at the Emerald Circus, after being tossed several Super Mario Bros.-styled Super Mushrooms. 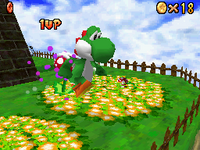 In Super Mario 64 DS, the mushroom has the same effects as the Mega Mushroom and makes the player grow to a larger size. The character can then obliterate almost anything in his path, and if he breaks more than eight objects, he will get a 1-Up for every additional object he destroys. The mushrooms are always found in Bricks and stumps scattered throughout the level and are introduced in the Bob-omb Battlefield. The character cannot do any special types of jumps, such as the Triple Jump. If Yoshi grabs a mushroom, he gains the ability to punch. 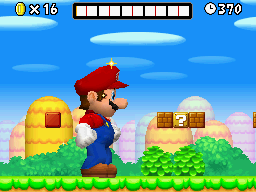 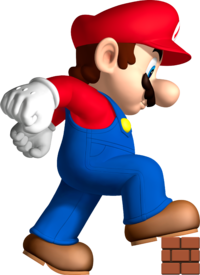 The Mega Mario form returns in New Super Mario Bros., being obtained from the rare Mega Mushroom. The more objects Mega Mario breaks, the Mega Meter[1] will get filled in. If he fills in each segment by crushing a certain amount of objects, Mega Mario can gain up to five 1-Up Mushrooms when the form wears off. Ground Pounding as Mega Mario usually causes a group of Goombas or coins (or both) to fall from above. Mega Mario also has the ability to defeat almost all of the enemies in the game or squash any of the game's bosses in one hit, including Bowser in any of his forms. Mega Mario can also walk through Mega Unagis and Skewers. If Mega Mario falls into a pit, the purple toxic water or lava, or if time runs out, he can still instantly lose a life. If the Mega Mushroom is activated in tight spaces, Mario's transformation will be canceled and the Mega Mushroom will return to the touch screen; however, if Mega Mario is crushed in any way, he will revert to Super Mario and lose a life immediately after. Additionally, if Mega Mario completes the level, he destroys the flagpole, which will fill up one-fifth of the Mega Meter, ensuring at least an extra life is gained. After the Mega Mushroom wears off, Mario reverts to Super Mario, regardless of whatever form he was in before using the Mega Mushroom. Notably, when Luigi grabs a Mega Mushroom, the sound effect is louder.

The Mega Mushroom's colors were originally going to be similar to those of a Super Mushroom, but was changed in the final version. 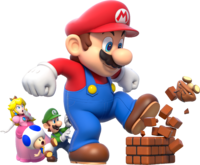 In the Bowser's Fury campaign, although not actually his Mega form, Mario can take damage as Giga Cat Mario during any of the fights with Fury Bowser (excluding the final boss) and revert to a powered-down version of himself in the same size as Giga Cat Mario. An unused angry and larger variation of the Mega Mushroom with a color-inverted cap named the Giga Mushroom also appears in the game's data. When used, it transforms Mario into a gigantic size.

In Mario Super Sluggers, any character can become temporarily Mega by finding a Mushroom in the mini-game, Graffiti Runner. When players are giant, they can create small earthquakes that can paralyze all ground opponents for a brief period. However, they are still vulnerable to body checks, Chain Chomps, and characters that are invincible.

In Mario Kart Wii, Mega Mushrooms appear as items. When characters use the Mega Mushroom, they become temporarily giant, allowing them to squash opponents and get a speed boost, even on off-road terrain. However, they are not immune to Lightning, invincible racers or Bullet Bills; Mega players hit by Lightning revert to their original size. When a racer is giant, the original Mega Mushroom theme from New Super Mario Bros. can be heard from them.

Players can become giant again in Mario Kart Tour with the return of the Mega Mushroom item. However, instead of squashing other racers, drivers that are giant simply cause them to crash. They can also take out large obstacles such as Thwomps and metal balls and obtain points in the process. Giant drivers are considerably more vulnerable than in Mario Kart Wii, shrinking back to their original size if they are hit with Bananas or any offensive item, including shells. They also do not get a speed boost and do not have off-road advantages. The Mega Mushroom theme, in addition, does not play.

Mega-sized opponents appear in Vs. Mega and Take them out quick! bonus challenges. In the former, the player must beat the opponent in a race, while in the latter, they must pop all of their balloons. These opponents retain their size for the whole race, and they can use items whenever they want. Sometimes, they can also use different special items.

In Mario & Luigi: Bowser's Inside Story, one of Broque Monsieur's attacks during his battle with Bowser involves hitting a block and obtaining a Mega Mushroom. While mega, he attempts to ram Bowser, but this attack can be countered by punching him.

In Mario & Luigi: Bowser's Inside Story + Bowser Jr.'s Journey, Bowser Memory M uses a Mega Mushroom to enlarge himself for his Brick Block breaking attack, rather than a Super Mushroom.

In Mario & Luigi: Paper Jam, Luigi uses a Mega Mushroom as the pivotal part of the Mega Thwonk Bros. Attack. He grows to his giant size from Mario & Luigi: Dream Team, and must charge at the enemy before smashing them away with his hammer.

In Mario Tennis: Ultra Smash, any character can temporarily transform into Mega form by picking up a Mega Mushroom the sideline Toads randomly throw onto the court. While in this form, players can hit the ball more easily.

During Toad's Special Shot in Mario Golf: Super Rush, he uses a Mega Mushroom to transform into Mega Toad to hit the ball.