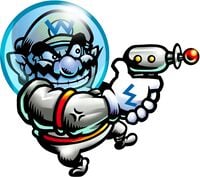 Cosmic Wario, with his laser-pistol

Cosmic Wario is the second disguise of Wario that appears in Wario: Master of Disguise. Cosmic Wario attacks with a laser pistol and can jump higher than normal Wario. He also has a floaty jump and can shoot through ropes and shoot blue balls that will activate objects such as ladders (in Episode 2, Cosmic Wario can shoot lasers to access a sort of hidden ladder). He is powered up by silver gems. To turn into Cosmic Wario, the player must draw a helmet on Wario's head. Cosmic Wario is the only disguise where Wario is seen wearing his cap.