More Shocking Than the Next Episode?

“Well, look what got dug outta the trash! It's ol' Kersplooshio...or whoever!”
—Wario, Wario: Master of Disguise

More Shocking Than the Next Episode? is the ninth episode of Wario: Master of Disguise. In this episode, Wario infiltrates Carpaccio's Lab in search of the fourth piece of the Wishstone. Throughout the lab are many yellow and blue buttons which open gates, spawn platforms, and operate various machines. To use them, Sparky Wario must charge the yellow and blue generators to supply electricity to these devices. Each button press takes away one unit of power, and each color can be charged to power eight button presses at a time.

After defeating Stuffy the 64th in Blowhole Castle, the girl from the previous two episodes finally introduces herself as Tiaramisu. However, she also says that she can no longer continue with her current power, then vanishes. After Wario progresses through the last few rooms of the castle, he is confronted by Count Cannoli. Wario demands to know where the remaining Wishstone pieces are, but Cannoli summons the Mad Hat Mk. III and commences his third and final battle with Wario. Wario wins, and once again demands the location of the Wishstone pieces, but Cannoli tricks him and escapes into the lab, with Wario angrily giving chase.

After finding his way through the lab, Wario comes face-to-face with Cannoli and his previously unseen ally, along with the fourth Wishstone piece. Cannoli's ally, who reveals himself to be Carpaccio, calls off the alliance due to Cannoli's failures, then reveals that he had been watching Wario since their first encounter at Sneezemore Cave and knows him much better now. Knowing he cannot beat Wario in a battle of strength, he challenges him to a race. Carpaccio says he will hand over his Wishstone piece if Wario wins, but if Carpaccio wins, he gets all of Wario's pieces. Despite Carpaccio rigging the race in his favor, Wario wins, and Goodstyle reads the writing on the newly-acquired Wishstone tablet.

Though the text seemed to indicate that whoever reassembled the Wishstone would have their wish granted, Goodstyle noted that some important details of the story were missing. 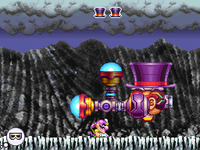 Upon starting the episode, Wario must go right to reach an area with many platforms leading upward. On the way up, he will encounter two Sir Lance-A-Lots and a Sir Worth-A-Lot. He must also use Arty Wario's power to get past two blue blocks and reach a high ledge. At the top, there is a tall stack of blue blocks that can be bypassed by pushing the blue block below it slightly to the left and jumping through a fake wall. The next section is another vertical room; it features a Sir Lance-A-Lot and two Sir Worth-A-Lots, as well as a moneybag. Wario can get to the top of the room using Arty Wario's blocks, but the way forward is blocked by a wall of blue blocks. A hidden passage to the left leads to a green chest, a red chest, and another moneybag. The red chest contains the Crazy Delicious Bamboo. The green chest contains the Dragon Mastery Gem, which turns Dragon Wario's breath blue, allowing him to destroy the blue blocks in his way and move on. Wario will encounter Count Cannoli, who tries to take him down with his Mad Hat Mk. III. After Cannoli is defeated, he escapes into the laboratory ahead. 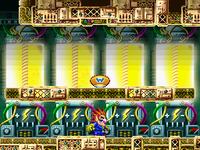 Inside, Wario will find a power plant. Here, Sparky Wario must charge the four generators so the machines in the lab will function. There is also a hat switch here. The path on the right leads to a room with an elevator that will only move while Wario is standing on the yellow button. Two electrical currents serve as hazards while going up. The next room has two buttons each of which will create a platform when pressed. After crawling through the passage on the left, Wario will find himself in a room with a Sir Worth-A-Lot. Shooting the laser switch opens the way to the left, where Wario will find a ladder. Wario can climb down the ladder and stand on top of one of Arty Wario's blocks to crawl through a hidden passage on the right, leading to a dark room. Inside this dark room is a button that will light up the area, as well as a purple chest and a green chest. The purple chest contains a map of the lab. The green chest contains the Wicked Guise Gem, giving him the ability to turn into Wicked Wario, who can fly straight up, but not side-to-side. Wario can drop through a Semisolid Platform as Dragon Wario to return to the power plant if the generators need recharged. By flying upward, Wario can easily return to the room with the ladder. Here, Wario must use Dragon Wario to drop through a Semisolid Platform, then quickly change into another form to avoid falling into a bed of spikes. Using the elevator to the left is unnecessary, since Wario can just fly to reach the area above, though there is a Mellow Kitty that will attempt to swallow him on his way up. A hidden passage on the top left leads to a room with four Sir Steal-A-Lots and a large heart, as well as two red chests. The chests contain the Handy Scrub Brush and the Superultramega Drill. Pressing the yellow button opens the way to the right. 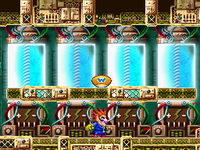 The next area has two Sir Worth-A-Lots and three buttons with numbers above them. The buttons must be pressed in order to open a gate. On the other side in an inactive button and a purple chest containing the Voltage-Proof Coil, which protects Wario from electric currents. By dropping through a Semisolid Platform, Wario will end up near a long pitfall. A green chest containing a Vita Mighty sits on a ledge on the right. After dropping down and going to the right, Wario will find another power plant, as well as another hat switch. The generators here provide blue electricity when charged, powering different devices than the yellow generators. The next room has multiple platforms moving vertically above a bed of spikes. The first hovering device will not spawn a platform until the blue button near it is pressed. Wario must hit several laser switches to open gates that are blocking the way forward, which eventually leads to a large heart. The gate after the heart must be opened by pressing the blue button next to it. After that is another gate with a button next to it, but opening it is optional; pressing the two laser switches near it opens a gate above Wario where a Sir Worth-A-Lot is patrolling. Flying through it lets Wario move on to the room on the left, where he will encounter a Sir Steal-A-Lot. In the bottom-right corner near two blue blocks is a red chest containing the Itchy Top Hat. Nearby is a blue button-operated gate, but it is not necessary to open it. Captain Wario can cut through the running water to reach the other side of the room. Arty Wario can then draw a block on top of a blue button to raise the water level and reach a ladder.

Climbing the ladder leads to a room with two moneybags and a hat switch. There are horizontally moving platforms with spikes hanging beneath them leading upward; climbing them leads to a room with a Sir Hop-A-Lot which will hit the blue button in the middle and waste power if not reacted to quickly. The next room has blue buttons that spawn platforms, though it is not necessary to press them. Five Sir Worth-A-Lots patrol the room and will infinitely respawn out of orange and green vortexes if they are defeated. The blue button at the end of the room activates a detonator that blows up a wall in the room below, allowing a green chest to be accessed. Inside the room, there is a moneybag and a blue button that opens a gate. Ahead are moving platforms hovering above beds of spikes. There are devices on the ceiling that shoot intermittent lasers that are only visible to Genius Wario; if Wario touches them, gates will close and Wario will have to press the blue button to reopen them, wasting power. Past the gates and two Sir Hop-A-Lots is the green chest, which contains the Wicked Mastery Gem, giving Wicked Wario the ability to move horizontally while flying. After returning to the room with the numbered buttons, Wario can press the previously inactive blue button to open the way to the room above, which has a hat switch and a metallic gray wall blocking the way to the right. When Wario approaches the wall, Goodstyle suggests finding an explosive to blow it up. 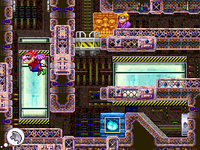 The room on the left has spikes on the floor and ceiling, with a blue and yellow button which each spawn platforms. However, Wario can simply fly through the room. Climbing up a ladder leads to a room with many moving platforms with spikes hanging below them. There is a yellow button which spawns a ladder leading to the top right corner of the room. Alternatively, this area can be accessed from the left by pressing a blue button with one of Arty Wario's blocks to open a gate. The room on the right has two moneybags and two red chests. They contain the Amazing Garlic Clove and the Lovely Pink Nightie. To the left past a Sir Worth-A-Lot, there are two gates which must be opened by pressing a blue button and a yellow button. A ladder leads up to a room with two Sir Hop-A-Lots and a purple chest containing the Dynamite. After using the dynamite on the gray wall, Wario comes face-to-face with Carpaccio, who challenges him to a race for the fourth Wishstone piece. Wario has to use his various disguises to make it through an obstacle course and reach the finish before Carpaccio does. In the first room, Wario must run through a fake wall, draw two Arty Wario blocks so he can crawl through another section of fake wall, and blast away numerous tiny blue orbs using Cosmic Wario's lasers. The second room contains blue blocks and Semisolid Platforms. Wario must drop through the second and third Semisolid Platforms, destroy a blue block, go to the right, drop down again, and go to the left. The third room is filled with water. Captain Wario needs to destroy two blocks and cut through some currents. In the fourth and final room, Wario must draw a block next to the blue block, press a button with Genius Wario's boxing glove, then fly to the finish as Wicked Wario. If Carpaccio reaches the end of a room before Wario, he will snap his fingers and spawn a flame in Wario's path. Carpaccio's path is shorter and free of obstacles, but Arty Wario can impede his progress by drawing blocks in front of him. After Wario wins, Carpaccio surrenders the Wishstone piece.