“I really light up a room!”
—Sparky Wario, Wario: Master of Disguise 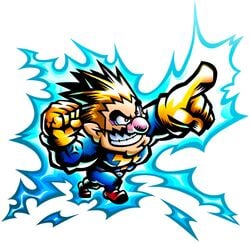 Sparky Wario is one of the many disguises of Wario in Wario: Master of Disguise. With this form, Wario can bring a small amount of light into a pitch-black room. Other things he can do is power up electric machines that were previously not working. The player can upgrade Wario's costume by getting the Sparky Mastery Gem. With this gem, the player can defeat enemies. To use the electric attack, the player must simply tap the touchscreen. Sparky Wario also has a resemblance to a superhero. To transform into Sparky Wario, the player must draw thunder over Wario. Black gems power the Sparky Wario disguise. In this form though, Wario walks much slower than Thief Wario. It is the fifth disguise obtained in the game.