Rookie's appearance is largely similar to his normal self's, though it differs in a few ways. The most noticeable physical difference is Rookie's blue, cat burglar-styled mask. For unknown reasons, the international versions of Superstar Saga also depict him with green eyes, although this trait is not carried over to the Japanese version or its Nintendo 3DS remake. In contrast to his physical appearance, Rookie's personality is drastically different than Bowser's; he is extremely trusting, loyal, and ultimately submissive to Popple, whereas his normal self is self-serving and believes others are beneath him. 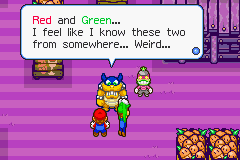 Rookie being encountered in Chateau de Chucklehuck, briefly recalling his memories of the Mario Bros.

When Bowser takes Mario and Luigi to the Beanbean Kingdom in his Koopa Cruiser, Cackletta and Fawful attack the cruiser, causing it to crash in Stardust Fields. Bowser lands in Tolstar's cannon and winds up being fired to Hoohoo Mountain by one of the Starshade Bros. after the Mario Bros. battle Tolstar. 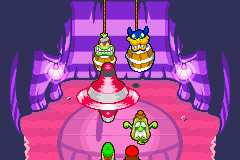 Rookie and Popple, right before Chuckolator sends them out of the room

Mario and Luigi first encounter Rookie in Chateau de Chucklehuck, shortly after seeing Popple for the first time. Popple orders Rookie to fight the Mario Bros. so that he can obtain the Chuckola Reserve, which the Bros. were also looking for in order to remove a Belly Blech worm from Queen Bean. Rookie attacks with hammers and Fire Breath, the latter of which occurs when he faintly recalls his memories of fighting the Mario Bros. Whenever he jumps before performing his attacks, the victim is Mario; whenever he does not, the victim is Luigi. Rookie protects Popple very zealously, counterattacking the Bros. every time they attack Popple. 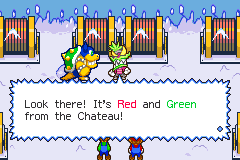 Rookie and Popple being encountered in the basement of Woohoo Hooniversity

After the battle, Popple reprimands Rookie for being unable to defeat the Mario Bros., and the two run off in hopes of getting to the Chuckola Reserve before the Mario Brothers. The thieving duo reach the Reserve before the Bros. (thanks to them hiding until the brothers brought all three Chuckola Fruits to Chuckleroot), but are captured by the Chuckolator. Mario and Luigi arrive and battle the Chuckolator, but not before the living soft drink hits the barrels Rookie and Popple are inside of with such force that they are ejected out of the room. 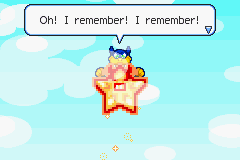 Rookie on the Beanstar, remembering who he actually is

The Mario Bros. encounter Rookie once more at Woohoo Hooniversity, down in the university's basement, right after Popple finds the Beanstar which had just fallen right next to him. Popple once more orders Rookie to fight the Bros. to protect the Beanstar. This time, Popple and Rookie have their own versions of Bros. Attacks, but the Bros. still defeat them without much effort. After the battle, a Peach-bot falls into the room and enrages the Beanstar with its squeaking, causing it to enlarge and fly out of the room.

Mario, Luigi, Popple, and Rookie grab onto the Beanstar in an attempt to stop its escape; however, the combined stress of hearing the Peach-bot's unpleasant voice and bearing the collective weight of the Mario Bros., Popple, and Rookie causes the Beanstar to shatter into four pieces. Each of the four clingers begin to fall off one by one until only Rookie is left, as the fragmented Beanstar heads toward Stardust Fields. It is only as he returns to the place where he lost his memory that Rookie at last remembers that he is Bowser, and then willingly lets go of the Beanstar. His recollection is short-lived, however, as he falls off the Beanstar before it breaks into four pieces, and Fawful encounters an unconscious Bowser and uses his body to house Cackletta's soul, creating Bowletta.

In Mario & Luigi: Superstar Saga + Bowser's Minions, Rookie's origin is significantly expanded upon. The remake reveals that Rookie's creation was indirectly and unintentionally engineered by Captain Goomba, the main protagonist of Minion Quest: The Search for Bowser. The reason for Rookie joining Popple is also revealed in a flashback: after losing his memory, Bowser collapsed from hunger. Popple was stealing food from Hoohoo Village at the time, and accidentally fed the amnesiac Koopa King when he tripped while escaping. Mistaking this mishap for genuine kindness, Bowser began to follow Popple around in spite of the thief's initial protests.

The captains later battle Popple when they find out he might know Bowser's whereabouts. Afterwards, Rookie appears to defend Popple. Captain Goomba, recognizing that Rookie was actually Bowser, attempts to reason with him, although Rookie does not remember his minions and leaves with Popple after berating them for defeating his boss, causing Captain Goomba to sulk in despair. After meeting Popple again, they learn Rookie went missing before the meeting starts another battle. After returning to Bowser's Castle, Bowser slowly remembers Captain Goomba was the one who gave him amnesia while on the mountain and revokes him of his title while chasing him in rage.

Rookie never reappeared in any other games (his true identity as Bowser nonwithstanding), although he, or more specifically Captain Goomba's inadvertent role in his creation, was given an indirect reference in Mario & Luigi: Bowser's Inside Story + Bowser Jr.'s Journey when Captain Goomba, when explaining he didn't wish to slack off on Goomba training by play-fighting Bowser Jr. and get Bowser upset, adds "again" at the end of the sentence.