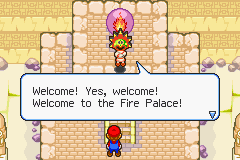 The Fire Palace is an ancient temple located on Oho Oasis in Mario & Luigi: Superstar Saga. The temple is very much isolated, so much so that when Mario enters the palace, Firebrand residing within tells him that he is the first visitor in 3,000 years. All those years have wreaked havoc on Firebrand's memory, however, as he cannot remember who he is or what he is doing in the Fire Palace. He subsequently leaves Mario alone and disappears. However, after Mario touches the red fire orb located on a pedestal in the room, he reappears with his memory intact and teaches Mario the Firebrand technique, which allows him to produce flames with his hands.