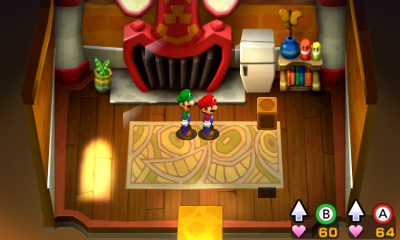 In Mario & Luigi: Superstar Saga + Bowser's Minions, Mario and Luigi can discover Hidden Blocks containing Hoo Beans throughout the Beanbean Kingdom. By jumping around at suspicious platforms or patterns, or in seemingly "empty" dead ends, the Mario Bros. can uncover invisible blocks containing single Hoo Beans. There are 41 Hidden Blocks in the game.

Like in the original, the Mushroom Kingdom, Koopa Cruiser, Stardust Fields, Hoohoo Village, Hoohoo Mountain, Hoohoo Mountain Base, Beanbean Castle Sewer, Chateau de Chucklehuck, Beanbean International Airport, Guffawha Ruins and S.S. Chuckola do not have any hidden blocks at all.

Even though the placement of almost all the blocks is the same, there are four things that differ from the original game: If the Bros. stand near the place with the hidden blocks for long enough, their location is revealed by sparkling, although this process can be bypassed by the Secret Specs, which are obtained by blending five different drinks at Starbeans Cafe, which if equipped to either bro. will allow the player to see the invisible blocks in the form of a white outline (also how they are presented in this list). These blocks are also counted in the block list feature, which returns from Mario & Luigi: Paper Jam. Like with the beanholes, this list is smaller, due to the areas being combined or renamed (Beanbean Outskirts+ Beanbean International Airport->now simply as Beanbean Fields, Beanbean Castle Town+Beanbean Castle+Beanbean Castle Sewer->now simply as Beanbean Castle, Oho Oasis+Oho Ocean+Oho Ocean Seabed->now simply as Oho Oasis, and Teehee Valley+Little Fungitown->now simply as Teehee Valley) and one hidden block in Joke's End was turned into a normal ? Block.