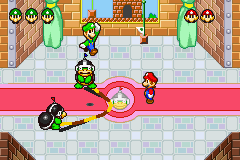 The Border Jump minigame from both the original and the remake.

Border Jump is a minigame in Mario & Luigi: Superstar Saga and Mario & Luigi: Superstar Saga + Bowser's Minions. The name "Border Jump" is a play off of an expression referring to illegally crossing borders. The Border Jump is hosted by the Border Bros in a small tower in the Beanbean Borderlands, the border between the Beanbean Kingdom and the Mushroom Kingdom, lying at the Stardust Fields. The Border Jump tests Mario's and Luigi's jumping skills. They have to jump over a rope while the Border Bros twirl and swing the rope in every direction. Mario and Luigi have three lives each in this minigame, and must complete it to progress through the game.

In the background of the room, a picture of an end-of-level castle from Super Mario Bros. is visible, complete with a flagpole that tracks the brothers' progress. When the brothers win, a number of points and fireworks appear next to the flagpole in the screenshot.