Prince Peasley is the Beanish prince and hero of the Beanbean Kingdom that appears in Mario & Luigi: Superstar Saga and Mario & Luigi: Superstar Saga + Bowser's Minions. He has golden blonde hair, wields a small sword, and flies around on a little winged bean-shaped platform. Although he is a heroic adventurer, he has a habit of flaunting both his hair and his smile. He helps Mario and Luigi during their efforts to stop Cackletta from taking over the world. Prince Peasley is also good friends with Princess Peach of the Mushroom Kingdom. 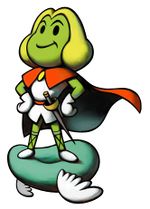 Before the events of Mario & Luigi: Superstar Saga, Prince Peasley was transformed into the monster Dragohoho by Cackletta. He was then sealed in an egg and placed at the top of Hoohoo Mountain. He was removed as a threat so that Cackletta could continue her plan of stealing Princess Peach's voice without interference. Soon after being trapped, Blablanadon took care of the egg, not knowing that Peasley is inside. Once Mario and Luigi travel to the top of the mountain, the egg hatches and Dragohoho attacks them. They eventually defeat it, transforming it back into Peasley. He introduces himself to the brothers and gives them his rose to show his gratitude, which allows them to enter Beanbean Castle.

Later, when Mario and Luigi heal Queen Bean from the Belly Blech worm using the Chuckola Reserve, Peasley enters the castle, revealing that he had been searching for the secret location of Cackletta's hideout and found out that it is inside Woohoo Hooniversity. He directs the two brothers to go there while announcing that he intends to head there as well. Peasley eventually flies in after Mario and Luigi defeat Cackletta inside the Hooniversity and Fawful attempts to attack them. He attacks Fawful with such force that he is ejected out of the Hooniversity's roof. He tells the two brothers to go after the Beanstar, which had crashed through the floor, before flying off again.

After the Beanstar shatters into four pieces and scatters all over the kingdom, Prince Peasley tells Mario and Luigi that Princess Peach is flying into the Beanbean Kingdom at the Beanbean International Airport, inviting them to join her. After her arrival, he reveals that he was aware of Cackletta's plan, and warned Peach of it beforehand, leading to the Princess being swapped with Birdo and her voice being stolen instead of the princess'. He then flies off in search of the Beanstar's pieces.

After Bowletta (the soul of Cackletta inside Bowser's body) captures Princess Peach and demands everyone to find the Beanstar pieces for her, Peasley marks the location of the pieces on Mario and Luigi's map before leaving. During his search, he gets swallowed by a Piranha Bean. He is eventually freed by Luigi, who defeated the Piranha Bean, but became much smaller after he was eaten. Luigi hits him with his hammer to grow him back to his normal height, and in return, the Prince gives him the Bean Fruit that he was looking for.

Once the Beanstar has been reformed, Prince Peasley comes up with a plan to trick Bowletta and keep the Beanstar while also rescuing Peach by giving her a fake Beanstar. He hands the fake star to Mario and Luigi and instructs them to get to Joke's End using the ocean by the beach. The plan works mostly well, though Luigi ends up plummeting to the ground and Peasley, trying to save him, lands on top of him. He lets Mario take care of Luigi before flying off to take the Beanstar to a safer place.

Bowser's Castle, under Bowletta's control, flies over the Beanbean Castle and shoots at it with Bullet Bills. During this time, Peasley evacuates Peach and the town residents to Little Fungitown. Peasley decides to fly to the castle and fight her on his own, deciding that the problem belongs to the Beanbean Kingdom and not Mario and Luigi, though they let him know that Bowser's room can be accessed through the plumbing system. The brothers enter the castle with the help of Blablanadon (who decides to help after finding out that Peasley is inside), and after a battle with Fawful, Peasley swoops in and attacks Fawful, getting stunned in the process but giving the brothers a chance to take care of him. After thanking Mario and Luigi, he flies away once more.

After Bowletta is defeated and Cackletta's soul has completely disappeared, Prince Peasley arrives, telling Mario and Luigi that he rigged an explosive device under the castle, which will blow it up and cause it to fall to the ground, and instructs them to escape before flying off. With Blablanadon, everyone escapes, and Mario, Luigi, and Peach soon get ready to leave the Beanbean Kingdom, saying goodbye to Peasley, Lady Lima, and Queen Bean. Before they depart, the prince attaches a "gift" (which is Bowser trapped in gift wrap) to the back of the Toad Express.

Prince Peasley retains the same role in Mario & Luigi: Superstar Saga + Bowser's Minions. In Minion Quest: The Search for Bowser, he appears in the level Hunger Pains, where Captain Goomba asks him about the location of some Fire Stalking Piranha Plants, but provides no information to the minions. At the end of the level, Captain Goomba directs a Piranha Bean to Prince Peasley, leading to him getting eaten by it. Additionally, he appears as a secret Flying unit, unlocked after getting the initial ending. His Special Skill, Charging Champ, allows him to charge into enemies with his sword. Prince Peasley is strong against Gold Beanies. His default level is 34 (like Starlow, who is unlocked at the same time). However, his stats are much higher, except for SPEED and SPIRIT. After the captains defeat Fawful for the last time, Prince Peasley directs them to Bowser's location. 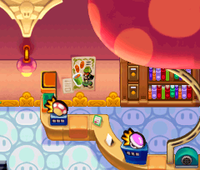 In Mario & Luigi: Partners in Time, Prince Peasley makes a cameo appearance. He appears in a poster in the Shroom Shop of the present Peach's Castle, along with Chuckola Cola and Chuckola Fruit from Mario & Luigi: Superstar Saga.