The Chuckolator is a boss encountered in the game Mario & Luigi: Superstar Saga and its remake, Mario & Luigi: Superstar Saga + Bowser's Minions. The Chuckolator is a large, red creature made of Chuckola Cola, with black eyes and the metal rims from the barrel's openings above and below its body; its arms can take on different forms such as a rifle or a sword. It was created by Bubbles, the founder of the Chuckola Cola Company, to protect his Chuckola Reserve, which he had been working on perfecting for 1,000 years.

The Mario Bros. encounter the Chuckolator during their search for a cure to save Queen Bean from a Belly Blech-related disease. When they request some of the Reserve from Bubbles, he explains the amount of time and effort he had invested in perfecting it before showing the Bros. Popple and Rookie, who had been captured attempting to steal the Chuckola Reserve. Popple yells that the soda was no ordinary beverage and they couldn't stand up to it; the Chuckola Reserve itself then springs to life from its barrel and attacks, sending the thieves flying as Bubbles praises his creation's wonder. He then sets the monster after Mario and Luigi, forcing them to battle it.

Upon its defeat, it reforms its barrel and retreats within, turning into normal soda once more. Bubbles takes the defeat of his creation poorly and destroys the floor of his shrine, sending the Mario Bros. and the Chuckola Reserve's barrel into the underground caves below. Mario ends up falling in the barrel, and Luigi eventually finds it and brings the barrel back to the castle. Queen Bean is then cured when Luigi jumps on the soda-filled Mario and sprays the Reserve into her mouth, expunging the Belly Blech Worm and returning her to normal. 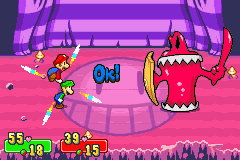 The Chuckolator starts out with a wooden shield made from part of its barrel, and is fairly resistant to jump-based attacks; the best means of damaging the Chuckolator is to first destroy the shield, which it will use to protect itself from the Mario Bros.' hammer attacks. The Chuckolator attacks by shooting bubbles of soda from its rifle-like right arm; this is dodged by jumping, with the right arm pointing at the target brother before it shoots. It can also line up with Mario or Luigi and use the sword-like left arm to send blobs of soda straight at its target; these must be stopped with the hammer. Both projectiles possess the same eyes as the Chuckolator itself.

The shield is normally worn on the right arm, and the Chuckolator switches the shield to its "off-hand" when using the other arm for an attack; the shield remains in whichever arm last served as the "off-hand". This does not affect its actual ability to defend against hammer attacks; however, in the original game, the Chuckolator's speed is lower when using the bubble-shooting attack, and switching between attacks will "raise" its speed and possibly allow for consecutive attacks. Destroying the shield makes the Chuckolator more vulnerable to hammer-based moves such as the Chopper Bros. and lowers its defense in the original game. In the 3DS remake, the Chuckolator's defense is unchanged, only rising when using its sword arm, since the shield is held out in front of it; without the shield, it has the same defense as it does when using its rifle arm.

However, once deprived of its shield, the Chuckolator can also attack up to three times per turn, and the original game also raises its actual speed. It may alternate between its two attacks multiple times, and uses its rifle arm from whatever position it was standing in previously, making the shots slightly harder to dodge. The Chuckolator only returns to its default position after its turn is complete.

After enough damage is dealt, the Chuckolator collapses into a smaller form that takes more damage from hammer-base attacks (though it still resists jump-based moves). In the original game, this form has slightly more defense than it did with its shield, and its speed is almost doubled; the remake halves its defense instead and makes it much slower. Its only offense in this form is a ramming attack that may poison Mario or Luigi unless the target brother counters with the hammer; the remake turns this into a biting attack. Before each of its turns, Bubbles may spin onto the battlefield and tell the monster a joke, restoring varying amounts of HP; the Chuckolator returns to its previous form if it regains enough HP this way.

In Mario & Luigi: Superstar Saga + Bowser's Minions, the Chuckolator is one of the few bosses not to gain the Fury status after losing half its HP or more, since it instead takes a weaker form as it did in the original.