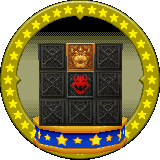 A figure of Blockhead Bowser from Mario Party DS

Blockhead Bowser can morph into three different forms - a spinning top, a huge cube, or a snaking trail of blocks. The form is impenetrable, except for the one golden Bowser Block, which has to be attacked by the player in order to defeat Bowser. First, Blockhead Bowser will form into a top and spin around, flinging fireballs and lighting itself on fire before falling over. When it falls, the player can attack the gold Bowser block. After it is hit five times, the blocks will separate and reform into one large cubic block. The block will flip toward the player, shoot a fireball out a Bowser block on each side and flip again. Once the gold Bowser block is hit five more times, he will reform into a trailing snake-like form. It will slither around the arena shooting fireballs. The gold Bowser block is wreathed in flame, so the player must wait until it slithers toward the middle and snuffs out the flames. This gives an opportunity to attack, but the player must be wary, as the block shoots fireballs in three directions. Once it is hit five more times, Bowser is defeated.