Not to be confused with Toy Box.

Tox Boxes are rare enemies in the Mario franchise. They resemble metal or stone boxes with multiple faces that roll along set paths. The paths they go on are usually similar to their width, making it nearly impossible for Mario to walk around. Tox Boxes first appear in Super Mario 64.

Tox Boxes have faces on all but one side; the last side is only a square hole. This hole is for Mario to stand in as a Tox Box passes over the tile he is standing on, thus letting him survive without being crushed. However, the edges of the holed side still crush Mario if he stands under them.

Tox Boxes appear as red industrial metal boxes with spray-painted faces in Super Mario 64 and Super Mario 64 DS, but they were redesigned for Super Mario Galaxy and later games, currently appearing as a relative of Thwomp designed after the Japanese oni. The Japanese name was changed to reflect the new appearance.

Shigeru Miyamoto regards the Tox Box as one of his best designs and a "masterpiece," stating Tox Boxes embody his game design philosophy of making gameplay mechanics clear and quickly understood at a first glance.[1] 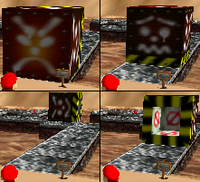 Tox Boxes roll around to crush Mario in Super Mario 64.

Tox Boxes appear in Shifting Sand Land, the eighth course of the game. They attempt to flatten Mario by rolling over him. The path is a small maze of tiles surrounded by darker, faster-moving quicksand that sucks Mario in instantly. The tiled maze that the Tox Boxes travel on has a few Red Coins on it, as well as the course's only cannon. If Mario gets squished by a Tox Box's side, he loses three wedges of health. Long-jumping into the side of a Tox Box's face that is above quicksand, off the side of the track, kills Mario instantly, playing the animation as if he has just fallen into the quicksand.

In Super Mario 64 DS, if Wario is inside one of the Tox Boxes and punches (or jumps), the Tox Box will fly somewhere into the quicksand and sink, or onto a metal platform and shatter. If the Tox Box falls in the sand that the characters can normally stand in, it will simply stay in one spot until the player leaves the level. Tox Boxes also appear in the Super Mario 64 DS minigame Tox Box Shuffle, where three of them each hide a Green or Light Blue Yoshi and the player must guess which Tox Box it is in.

Tox Boxes reappear in Super Mario Galaxy. These redesigned boxes usually appear alongside Thwomps. They appear only in the Beach Bowl Galaxy and the Toy Time Galaxy. In both galaxies, they appear on small pathways, much as they did in Shifting Sand Land.

Unlike the Tox Boxes in Super Mario 64, these ones resemble Thwomps; instead of having the faces spray-painted on, they are carved in a way resembling a Thwomp's face. These Tox Boxes also lack a face on the side opposite the hole. The hole itself has also been expanded quite a bit, and colored in red to resemble a mouth. Being crushed results in an instant death. 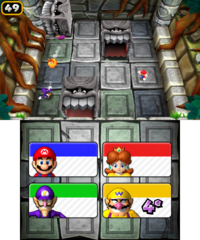 Tox Boxes appear in the minigame Hide 'n' Splat in Mario Party: Island Tour. Here, they try to squish the players using the same methods as in past games, but they get faster as the time limit decreases. They retain their appearance from the Super Mario Galaxy games. 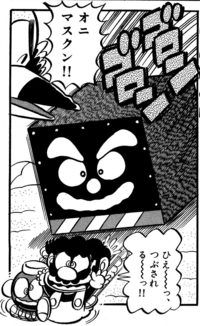 The Tox Box in Super Mario-kun

A Tox Box makes an appearance in volume 16 of Super Mario-kun. It is an obstacle against Mario's path to retrieve his lost hat from Klepto. Hatless, Mario tries using a ! Block to combat against the Tox Box; he still ends up getting smashed. In the manga, the Tox Box is able to smash Mario, even on the safe side.