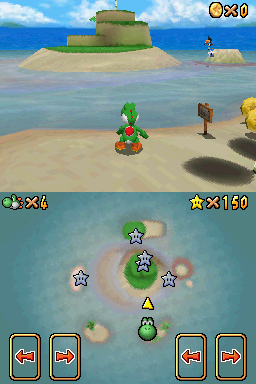 Sunshine Isles is one of the exclusive courses from Super Mario 64 DS focused on collecting five Silver Stars. The entrance to the course is the painting in the Rec Room, which requires one Power Star to access. It is also a selectable stage in the game's multiplayer mode. The course is based on and named after Super Mario Sunshine, with the course's music being an arrangement of Delfino Plaza's theme.

Sunshine Isles consists of five small islands with a larger one in the center located in a large shallow ocean. Several of the islands have palm trees, and some also have grass covering them, though each is made up of sand. Klepto from Shifting Sand Land circles the one area of the course, with two Lakitus hovering over others. On the center island, there is a sleeping Piranha Plant and a Goomba, with another Goomba on one of the other islands. If the player tries to leave the area, they will be stopped by an invisible wall. On the northern island is a yellow block containing a Shiny Shell.

In multiplayer, the music has been changed, there are no enemies, and a VS Item Block containing Wings is in place of the yellow block that had a Shiny Shell.

One Power Star can be collected in this course. Located around the isles are five Silver Stars the player has to collect. The locations of the Silver Stars are:

Once all of the Silver Stars are collected, the Power Star appears in the Star Sphere on the island that the player started on.