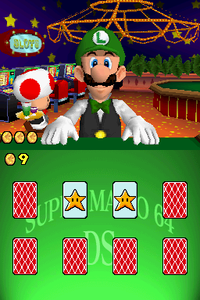 Memory Match is one of Luigi's minigames in Super Mario 64 DS and a Table minigame in New Super Mario Bros. This minigame plays identically to the real-world card game Concentration.

A harder version of this minigame called Memory Master is exclusive to Super Mario 64 DS.

Betting three coins, Luigi serves a group of eight cards upside down, and the player must match them up with their twins. The symbols on Luigi's cards can be a Cloud, a Mushroom, a Fire Flower, or a Star. By completing a challenge successfully, the player gains a double number of coins bet and receives a Star as a point. Earning five Stars makes Luigi serve ten cards, and earning ten Stars and more makes him serve twelve cards. If the player taps two different cards, a coin is given to Luigi from the bet number, causing the likely loss of a Star if Luigi takes all these coins. If the player loses all of the money to bet, the minigame ends.

In multiplayer, there are 20 cards. The player who goes first is chosen randomly. The players go in order. If the cards a player taps match, the player earns two points and gets to go again until they are wrong. Once all the cards are gone, the player with the most points wins.