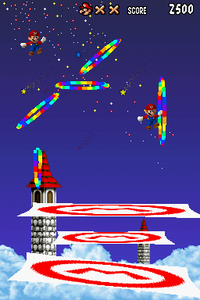 Trampoline Terror is one of Mario's minigames in Super Mario 64 DS. This minigame is very similar to Trampoline Time, except Mario must earn points by going through rainbow rings. Both minigames use Super Mario Sunshine's secret level music.

At the beginning of the minigame, a long line appearing at the bottom of the Touch Screen turns into a large trampoline. If Mario bounces off it, the trampoline turns yellow and then red. The third time that Mario bounces off it, the trampoline disappears. The player can draw more trampolines by using the stylus, so Mario can bounce off them to get through the rings that appear on both screens. The closer Mario is to the center of a trampoline when he bounces off it, the higher he jumps. Like in the other trampoline-based minigames, no more than three trampolines can be visible simultaneously. If Mario passes through a ring, 100 points are earned. However, if Mario goes through multiple rings in succession without bouncing off a trampoline, the points are doubled each time. Initially, there is only one Mario to jump around. When the player gets 1,000 points, a second Mario appears. Getting 5,000 points creates a third Mario. At 10,000 points, the player has four Marios to manage. If the player gets 20,000 points, a fifth and final Mario appears. If the player loses three lives, the minigame ends, showing the scores.

Only players with superb stylus skills will be able to make Mario bounce through the rings!