Not to be confused with Phantamanta.

The manta, also referred to as the ray, is an aquatic species found in various Mario games. Mantas are peaceful creatures, much like real manta rays. Some leave trails of regenerative rings behind them as they swim, and others can be used to surf above channels of water.

A Manta Ray, also referred to as the Manta[1] or Ray,[2] first appears in Super Mario 64 and its remake, where it resides in the level Dire, Dire Docks from the second Power Star onwards, swimming in a circle around the whirlpool in the center of the entrance area. The Manta Ray will leave a trail of bubble rings as it swims around the whirlpool. If Mario, Yoshi, Luigi, or Wario can swim through five rings in a row, he will be rewarded with a Power Star; this is the focus of the mission The Manta Ray's Reward. Moreover, he can swim through a ring to regain lost oxygen. However, if the player character misses a ring, he has to start the five-ring sequence all over. If he swims through a ring correctly, a red number will appear. When the player character accomplishes the five-ring task, the Star will appear at the top of the whirlpool. The player character should also keep distance from the Manta Ray's tail, as it can deal damage. 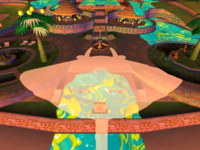 A spectral Manta appears as a boss in Super Mario Sunshine, appearing at Sirena Beach. It is flat and moves along the ground and other surfaces as though it is a light projected from the sky, constantly leaving a trail of electric goop behind it. Spraying it with FLUDD causes it to split into progressively smaller forms.

A small, friendly manta named Ray appears as a minor character in Super Mario Galaxy. Mario can surf on his back along tracks in the Loopdeeloop and Loopdeswoop galaxies.

Types of mantas called Jumbo Rays appear in New Super Mario Bros. Wii. They are green and wear a pair of water goggles. They can fly, so Mario and company can stand on them as platforms for a short time. Their appearance and manner of aiding the characters to pass some obstacles are rather similar to those of Dolphins from Super Mario World.

In Mario Party 4, there is a minigame called Manta Rings in which a Manta releases golden rings while swimming. These rings give the players three points unlike the usual blue ones, which give out one point.

A single manta appears in Mario Kart 8 and Mario Kart 8 Deluxe on the Dolphin Shoals course. It has water goggles, light spots, and peach lips, resembling a Jumbo Ray, but retains its blue color, cephalic fins, and visible gills. It also has a small dorsal fin. 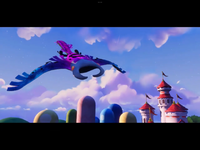 In Mario + Rabbids Sparks of Hope, a giant flying manta made of Darkmess, known as Darkmess Manta, appears above Peach's Castle, covering the landscape in Darkmess. It abducts Rabbid Peach, and Mario and Beep-0, along with the Spark Starburst, rescue her. After this, it is not seen for the rest of the game.

A manta using its Super Mario 64 DS model appeared in an early build of New Super Mario Bros. with an unknown role, but did not appear in the final game.