This article is about the race course from Mario Kart 8. For Rainbow Road as a whole and other versions of the track, see Rainbow Road.

Rainbow Road is the fourth and last course of the Special Cup in Mario Kart 8 and Mario Kart 8 Deluxe. Unlike its predecessors, this incarnation takes place in a space station presumably owned by Mario Kart TV or REXA, with its multiple satellites floating, satellite-formed bleachers with an audience cheering, and the road designed to resemble a space station's solar panels, as opposed to the transparent glass surface of previous games. It is located above the Earth's atmosphere, similar to that of Rainbow Road from Mario Kart Wii. One noticeable feature of the course is a space shuttle that resembles a Blooper which circles around the course. Due to the presence of the space shuttles and technological architecture, the course has a unique electronic and futuristic design, appearing like a stadium floating above the atmosphere.

The track itself is located on a series of enormous, curved solar panels covered in multicolored, square tiles. The rainbow patterns are similar to that of the Mario Kart: Double Dash!! iteration, which mainly consists of light pink, yellow, and turquoise, though the colors now appear to be shifting within a color spectrum, similar to Dash Panels of previous installments before Mario Kart 7. Several Toads can be seen floating around the starting line, wearing spacesuits.

This is the only Rainbow Road (so far) to have off-road terrain segments. The music also has a different feel to it, with more emphasis on an electronic rock style. The game's producer, Hideki Konno, describes it as "really spectacular".[1] Music for this course is used in various promotional material for the Booster Course Pass downloadable content for Mario Kart 8 Deluxe. 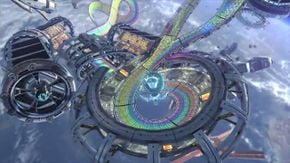 The course starts in the first space station with its rainbow-colored solar panel. After a turn, the racers drive through the first anti-gravity section, which is 8-shaped. A Glide Ramp is found after the anti-gravity section and leads to the second space station with a large imprint of Mario's emblem on the entrance. It features conveyor belts with opposite directions that changes every 50 seconds, like Toad's Factory from Mario Kart Wii, even using red and green as the colors denoting which one is slowing racers down and which one is speeding them up. Unlike that course, though, the green belt has ramps pop up, allowing for tricks to be performed. At the end of the conveyor belts, there is a slope with alternating sets of 2 Dash Panels and at the end of it are two Glide Ramps that lead to two intertwining anti-gravity sections. The gliding section consists of three Rings that resemble Launch Stars, and it acts similarly to a cannon, though racers can slightly control their gliders.

The anti-gravity paths alter in height, so if the player falls from the highest one, they can generally land on the other one. Each one twists in different ways, forming another 8-shape. Then the paths merge and the anti-gravity section ends. A 180° turn with some Dash Panels along the outermost part, like in Mario Kart Stadium, and another turn make the track loop end. The third 8 is formed by the ending portion of the split path and the 180° turn. At this turn the player can see a hologram projection that says "SPECIAL CUP" with its trophy logo, albeit only in single-player mode. The racers then return to the space station where the finish line awaits them and begin the next lap.

There are three 8-shaped sections in this course, referencing its game, Mario Kart 8. One is right away from the starting line after exiting the large space station, and the other two are formed by the two twisting paths in the descending anti-gravity segment.

Before the finish line, a screen can be seen displaying the course's map. Other courses containing their own map are Water Park, GCN Yoshi Circuit, and, in Mario Kart 8 Deluxe, Merry Mountain. The screens can also display the structure of the Blooper space shuttle.

"This course is actually located on a space station and we've reflected that in the music by using futuristic-sounding effects."