This article is about the race course from Mario Kart 7. For Rainbow Road as a whole and other versions of the track, see Rainbow Road.

Rainbow Road is the last course of the Special Cup in Mario Kart 7. The course has once again increased in length compared to previous renditions, but still shares a similar theme to its predecessor. Instead of floating above the atmosphere, it now takes place around the Moon, with several small asteroids in the background. As a result, unlike past Rainbow Roads, this incarnation features the player driving on off-road surfaces such as the Moon itself and rings of Saturn. It is the first Rainbow Road course to contain one lap divided into three sections, being followed by N64 Rainbow Road in Mario Kart 8. Due to its length, it is the longest course in the Mario Kart series, and as such is also the longest Rainbow Road in the series; however, the Mario Kart 64 iteration of Rainbow Road takes more time to complete, as it is three laps long instead of one.

This Rainbow Road returns as a retro course in Mario Kart Tour, starting with the 2019 Holiday Tour. While not the only course divided into sections in the game due to the presence of N64 Kalimari Desert 2, Tokyo Blur 4, New York Minute 4, and Wii Rainbow Road or the only 3-lap (or in this course's case, 3-section) track in the game due to the existence of GCN Baby Park T, it is the only track to have both traits. It also returns in Mario Kart 8 Deluxe as the fourth and final course of the Moon Cup in the Booster Course Pass.

When performing a trick on this course, a slightly different sound effect will be produced when compared to other courses; the same applies to SNES Rainbow Road.

This course has the most Glide Ramps out of every Mario Kart course, with five. However, only the Glide Ramps going onto and off of the planet rings are mandatory.

The start of the track. The colors on the start-and-finish checkered line (cyan, magenta, yellow, and black) constitute the four plates of the CMYK color model.

The race starts off with a short straightaway, following with a sharp turn to the right, then left, going around a planet. Afterward, there are three platforms that the drivers drive and jump off each one (similar to the area before the temple in DK Jungle). Next, players drive around another planet, but are spiraling down as they do so, with drop-offs allowing for tricks. The track then comes to a rainbow-spotted Mushroom Trampoline, and then a sharp right turn. After the turn, players have the opportunity to snatch some item boxes and coins on a waving road (similar to Mario Kart Wii).

Section two starts off with another sharp turn followed by a Glide Ramp, which activates the Glider to ride onto the rings of a Saturn-like planet. Players have to dodge holes in the rings before they then come to a section where they can hit some Dash Panels for speed boosts. Players then activate their Glider again after hitting the next Glide Ramp at the end of the rings. Once landing, players take three turns, all loaded with Dash Panels. Next, there is another wavy road, but this one has holes in it. Once the drivers make it through the wavy road or fall through, they land on the moon, where they need to dodge rolling Chomps, and they can trick off of craters for little boosts. Though there's no water in the moon portion, its low gravity works identically to the physics of driving underwater, so sometimes players can fly far with just one trick.

Section three starts with some conveyor belts that give little boosts, then leads into a turning tunnel with Dash Panels and Glide Ramps at the end. The track splits into two parts, then three, then two, before fusing back into one. This part is filled with ramps that can be used to go through rings for extra speed. If players hit a Glide Ramp, they have to dodge asteroids, but try to pass through rings at the same time. The track ends with a part that increases in altitude, then decreases again, leading to one small jump facing the finish line.

There are three Item Boxes floating under the rings of the Saturn-like planetoid. It is possible to get one of these Item Boxes by gliding, but the player must get back on the track after getting it in order to use their item. However, it is quite difficult to do so without a mushroom. 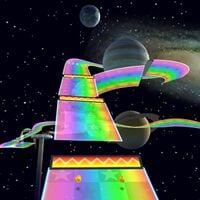 This version of Rainbow Road returns in Mario Kart Tour, starting with the 2019 Holiday Tour. Various changes have been made to the track - it is noticeably flatter overall, with several turns being far less banked. The start-and-finish truss is now formed by a rainbow arch with a gold half star surrounding it and displays the Mario Kart logo in cyan. The checkered line is now black and white, instead of magenta, yellow, cyan, and black. The other two trusses for the start of the second and third sections are also formed by a rainbow arch and display three golden stars. The rails on the race track are now formed by golden stars while the rails on the moon are now formed by cyan neon lights. The star-shaped rings are now silver and have disco balls at the corners pointing outwards, like the golden star-shaped ring on the rotating tunnel. The launch rings are now cyan, resembling the dash ring items. The curbs, located on the turn after the start of the second section and at the descending section before the jump to the stretch to the start-and-finish line, have been removed. The series of jumps following the first few turns have been aligned. The part between the trampoline mushroom and the start of the second section is now entirely wavy. At the turn after the start of the second section, the rails are placed on the left side of the track, instead of the right side. The series of turns following the second Glide Ramp have also been made tamer. The boost panel on the wavy section before the moon area has been replaced with a trick ramp. Toads in space suits now appear as spectators next to the spaceships and the moon near the first turn is now a blue planet that resembles Uranus, while Jupiter replaces the second moon. After the start of the third section, the golden arches are replaced with star-shaped rings. When driving on the boost conveyors, the acceleration sound effect has been removed. The rail at the descending section before the jump to the stretch to the start-and-finish line has been removed. Plus, the jump ramp at the jump has been removed. Earth is also now visible in the background of the track, and the galaxy has been replaced by the Andromeda Galaxy. The sun has also been moved to a spot that is visible from the Moon section. This course is a favorite of Lemmy, Birdo (Light Blue), Mario (Happi), Rosalina (Aurora), Daisy (Fairy), Fire Rosalina, King Boo (Gold), King Bob-omb (Gold), Birdo (White), and the Rosalina and Gold Mii Racing Suits. This course is also a favorite of Mario (Satellaview) and Rosalina (Swimwear) if they are at level 3, Baby Peach if she is at level 6, and Dry Bowser (Gold) if he is at level 8. Like all other courses, Rainbow Road has a reverse variant referred to as Rainbow Road R, a trick variant known as Rainbow Road T, and a reverse and trick variant known as Rainbow Road R/T, which debuted in the Baby Rosalina Tour.

The T and R/T variants of this track are two of four courses in Mario Kart Tour that do not start in the same place as the original, the other ones being 3DS Rock Rock Mountain T and Singapore Speedway R/T. For both variants, the starting line is now just after the spinning tunnel. 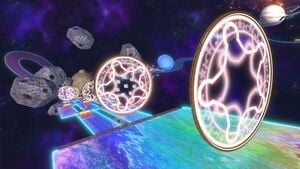 This version of Rainbow Road returns as the fourth and last course of the Moon Cup in the Booster Course Pass DLC for Mario Kart 8 Deluxe. It is based on its appearance and layout in Mario Kart Tour, albeit with a graphical overhaul, giving the course a neon aesthetic. The rainbow arches on the start-and-finish truss and the truss at the start of the second section are now a complete circle. The start-and-finish checkered line is now blue and cyan. The Dash Panels on the Saturn-like planet’s rings now have boost rings on top of them. The boost rings and the star-shaped rails are now in the form of the ones in N64 Rainbow Road. Uranus is now replaced by Neptune. The moon section is now in anti-gravity, just like the battle course Lunar Colony.[1] It is the first and only course not entirely in anti-gravity in Mario Kart 8 Deluxe to not have an anti-gravity section marked with an Antigravity Panel, as anti-gravity is activated as players fall toward the moon. The rainbow tunnel spins more slowly than in past iterations of the course and the star-shaped ring on it is now yellow. The minimap now lacks the holes in the wavy road prior to the moon section. The arranged music includes both the "moon" and "final lap" versions; it and 3DS DK Jungle are the only retro courses in Mario Kart 8 Deluxe to retain every unique variation of their background music.

Rainbow Road is one of two courses to originate from Mario Kart 7 to appear in the third wave of the DLC, alongside 3DS Rock Rock Mountain.

Excluding Mario Kart 8's Rainbow Road theme, which is used in all trailers for the Booster Course Pass, 3DS Rainbow Road was one of two courses whose music was used for the second trailer for Wave 3, alongside Wii Maple Treeway.

This Rainbow Road appears in Super Smash Bros. for Nintendo 3DS as a stage. The match takes place on flat platform and is a cruise-type stage similar to Port Town Aero Dive. Shy Guys also appear as stage hazards similar to the F-Zero machines from Port Town Aero Dive and the Shy Guys from Figure-8 Circuit. It also has a trophy in this game.