Bowser's Castle is the third course of the Special Cup in Mario Kart: Double Dash!!. Racers start out outside of the castle and enter through a large doorway shaped like Bowser. As they proceed through the hallway, Thwomps will try to spin them out or squish them. Racers will then travel over a pit of lava and through a circular room filled with Podoboos. During the final stretch of the course a statue of Bowser will shoot fireballs at oncoming cars. If the players have any trouble, Bowser's famed laugh will emit. Escaping the castle by a jump only leads to the front of the track again for the second lap.

This course shares its music with the Luigi's Mansion battle course. An arrangement of its theme is used in the stage of the same name in Dance Dance Revolution: Mario Mix. Additionally, part of the theme is used in the music for Bowser's Castle in Mario Kart 7. The original theme can also be heard when using the Bowser Kart in the Nintendo DS game Nintendogs. The mountains in the background resemble the ones in Broken Pier from Mario Kart: Super Circuit. 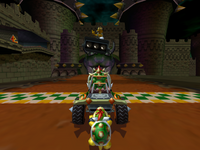 The start of the track with Lakitu, Bowser Jr., and Bowser

The race starts in a quite straight dirt road that leads into the castle, past a drawbridge and into an opening that is shaped like Bowser. The players can then see that the path splits, but it results in two identical paths that also have the same obstacles: Thwomps. Past that, where the path meets again, is a 90 degree turn to the left with leads into another straight path with Thwomps. In split screen mode, the Thwomps in this lane are absent. After the Thwomps, there is another turn left that leads into a room with lava on the ground.

In the room with the lava on the floor, the players drive over a chain link bridge with a square in between. In single player, Podoboos will fly out of the lava and try to burn the players. Falling off the chain link bridge results in falling in the lava. After the chain link bridge is a ramp with Dash Panels on it. Past the ramp is a long curve that spirals upwards into a nearly complete circle. Succeeding the curve is another circular room, this time with fire balls that orbit a pillar in the center. The players can see portraits of Bowser Jr. on the walls of this room.

Past the circular room is a short path that turns to the left in a 90 degree angle, which also leads to another 90 degree angle turn. It leads outside and the players can see the start of the course on this road. However, if players attempt a shortcut here, the game will consider it as falling off the course and place the racer back on the track. The road has two somewhat steep ramps that are not exactly straight, but they do not slow down the players. Past the ramps is a U-turn that leads to a straight road. The road then curves to the left, then makes a U-turn that leads into another interior.

In this room, there is a giant Bowser Machine that shoots one fireball at a time to the players. Despite that, the road is straight. After that is a turn left and a curve right that leads nearer to the Bowser Machine. The players then make a left turn onto a straightaway that also has the Bowser Machine's fireballs, but they aren't being directly shot at them. There is a ramp that has Dash Panels on it at the end of the section. After the ramp is a curve left leading to the finish line.

There is one notable shortcut in this course that does not require the use of a Mushroom. It is in the room with the Bowser machine. Before the curve that leads the players right, one can notice an opening in a wall, directly where the Bowser Machine belches out fire from. The players can drive over that, but must steer quickly or risk falling into the lava just after making the ramp. The players also have a risk of getting burnt by a fireball just before the jump, making the players also fall into the lava.

Adding to the ominous atmosphere, thunder can be heard before Lakitu starts the countdown at the beginning of a race.