From the Super Mario Wiki, the Mario encyclopedia
(Redirected from Boo Lake)
Jump to navigationJump to search

Boo Lake is the second race of the Flower Cup in Mario Kart: Super Circuit. It is, unlike the name would imply, a pier with a lot of gaps, like the Ghost Valley courses from Super Mario Kart. Boo Lake contains a considerable amount of Coins and Item Boxes. There are Boos which hold lanterns on this course. If the player falls off of the track, contrary to what the course's name indicates, they do not fall into water and instead into a pit. There is a bridge that flickers, making it hard to see on the part where the path splits around a hole with the bump on it, to the right of this area. The course shares its music with Broken Pier, part of which is an arrangement of the music used for the Ghost Valley courses from Super Mario Kart.

The course appears as a classic course in Mario Kart Tour starting with the 2022 Halloween Tour and Mario Kart 8 Deluxe as the second course of the Rock Cup in the Booster Course Pass.

The race starts out on a long, straight wooden road that eventually leads to a turn to the right. The turn will lead the player into a boost panel and a bump that makes the player bump up. The result of the effect is that the player crosses a large pit, in which they may fall into if they decide to swerve or bump into an opponent. In this small platform, there is another boost panel and bump that will serve the same function as before. There is a boost panel on the left of the platform to fly further. After that, there is an option to take a boost panel to the right, but in 150cc mode, the option to take that is inaccessible unless the player slows down and backs up. After the boost panel is a sharp turn right, which leads into another area.

The path splits and rejoins in this area of the track. There is a bump over a pit, in between the splitting path. The player may successfully fly over the pit if they use a Mushroom to boost and fly far with the bump (though it is possible to cross the gap without a Mushroom if the race is set to 150cc). After this part is a slow turn to the right and a U-turn to the right, which leads to a straight road, with some Boos carrying lanterns to light up some areas. The Boos will laugh at the player if they happen to cross underneath one, but it will not do anything else to help or hinder the player. After this straight path is a U-turn to the left, which is not very sharp and could be easily cleared without bumping into any walls.

After the U-turn is a slight curve to the left, which has a lot of bumps for the player to slightly get bumped up in the air. After turning to the right, the player arrives at the area where the finish line is. Before the finish line, there are several bumps; some that make the player fly over a very small pit in the left and right part of the track.

There are two shortcuts that the player can take. The first is quite short and narrow, and comes directly before the first small branching in the path. It is extremely hard to see, and resembles a ladder. Due to how easy it is to fall off and the small amount of time gained by using it successfully, it is an extremely risky path to take. The second is after the straight road with some Boos holding lanterns to light up the night. After the last Boo, the player may notice a narrow bridge to the left of their side, just before the U-turn. The player may proceed to cross the bridge to cut time, but it is very easy to fall off due to the narrowness of the bridge. However, it is nowhere near as narrow as the first, and is included on the map. 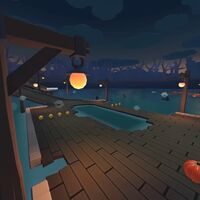 Boo Lake appears in Mario Kart Tour starting from the 2022 Halloween Tour along with SNES Donut Plains 3 and DS Twilight House. The course now resembles the SNES Ghost Valley courses even more, and there are also more walls around the course compared to the original version. In addition to the manor and dead forest from the original, a few dilapidated fortress structures have been added into the background, along with clouds being added to the sky. Rather than taking place over a pit, the course now takes place on a large lake (as its name implies to), which is driven into, making this the second classic course in Mario Kart Tour to feature a newly added underwater section, the first one being GBA Cheep-Cheep Island. Fish Bones act as obstacles in the lake section. The starting line is now accompanied by two posts holding a Mario Kart sign, which was absent in all Super Circuit courses. Many lamp posts have also been added to the course, replacing the candle-holding Boos in the original version.

The layout was recreated relatively faithfully despite the new underwater sections and elevation changes, akin to GBA Snow Land in Mario Kart 8 Deluxe. However, the bridge before the split path was removed and the turn leading to it was simplified to no longer have a diagonal portion. The turn after also begins immediately rather than there being a straightaway. The split path itself had its left side widened and the ramp on the gap has been removed. The bridge cut around the U-turn has been changed - there is now a gap in the wall where it originally was, with a small platform jutting out on the other side with barrels blocking the way. There is an added alternate path that appears on the minimap used in the R, T, and R/T versions of the track. The road leading up to the first jump now slopes downwards slightly, and the jumps themselves are now executed using regular ramps. There are also now Item Boxes present in the air after the ramp. The course is a favorite of Mario (Halloween), White Tanooki Mario, Mario (King), King Boo (Luigi's Mansion), Petey Piranha, and the King Boo and Chain Chomp Mii Racing Suits.

Like GBA Sunset Wilds and GBA Sky Garden, this course received a new arrangement of its music. This course, alongside Donut Plains 3, are the first classic courses in Mario Kart Tour to debut with their R/T variants.

This section is referring to a subject in an upcoming or recently released DLC wave. When the DLC wave is released, or more information about this subject is found, this section may need major rewriting. This notice should be removed after a month has passed since the DLC wave was first released. 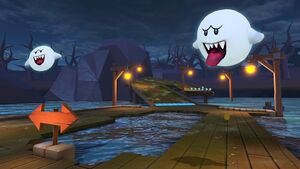 Boo Lake reappears in Mario Kart 8 Deluxe as part of Wave 3 in the Booster Course Pass. It is the second course of the Rock Cup. The course is based on its Mario Kart Tour design, but with graphical updates; notably, the cartoony clouds have been completely removed in favor of a more realistic skybox.[1] The ramps around the course have been redesigned to match the color scheme of the bridge. Wooden arrow signs have been added throughout the course. Thus far, Boo Lake is currently the first and only course that was added via a DLC pack to feature underwater driving in both the original Mario Kart 8 DLC and the Booster Course Pass. Additionally, the section beginning on the U-turn leading into the lake and the underwater portion of the course have been converted to an anti-gravity section. The Barrels blocking the shortcut have been replaced with bush cutouts. It is not known if the alternate path that appeared in Mario Kart Tour will be incorporated into the layout of this version, but it does appear to be part of the course model.

Internally, GBA Boo Lake was referred to as "Cnsw_33" in version 2.1.0, implying it may have originally been intended to be the third course of the Rock Cup.