Not to be confused with Neo Bowser Castle.

Neo Bowser City also appears as a retro course in Mario Kart 8, Mario Kart 8 Deluxe, and Mario Kart Tour. In the former games, it is the first course of the Bell Cup, a cup that comes with the Animal Crossing × Mario Kart 8 add-on content pack for the original Mario Kart 8, while in the latter game, it was introduced in the Tokyo Tour.

This course takes place in a brightly lit city in the rain. A large percentage of the course is comprised of winding roads with moving neon arrow railings. Traction is decreased due to the rain. There is a tunnel close to the end of the course, that leads to a small upward spiral section that is covered with puddles around a tower. A Glide Ramp then appears just before the end. A billboard is seen near it with a picture of either Bowser (said picture is his artwork from Mario & Sonic at the Olympic Winter Games), the player's view, or an animated "Overtake" ad from Toad Circuit. If gliding players veer left (right in mirror mode) from the starting line, they can fly over a Koopa Clown Car with a fan to give them enough height to skip the first bend; in higher engine classes, however, they must steer back quickly to avoid hitting the wall.

The course starts with an S-bend; however, players must steer back quickly to avoid hitting the wall. Just before the player enters the air vent area, it is possible to be pushed through the guardrails by a heavier opponent. After that, the race continues under a tower with air ducts. Then there are two soft turns and a red tunnel. After many turns, the player exits and reaches the winding part of the road, which consists of three hairpin turns. Then, there is a shorter tunnel that leads to a road curved to the left covered with puddles. At the end, there is a glide ramp back to the finish line.

Neo Bowser City returns in Mario Kart 8 as a retro course in the second DLC pack Animal Crossing × Mario Kart 8 and as part of the base content of Mario Kart 8 Deluxe. It is the first race of the Bell Cup. The city background is more futuristic in design and features more distinctive architecture such as skyscrapers, glass tunnels, elevators, and more LED screens, instead of having mushroom hills in the far background. Some of the buildings are reused from Mute City. The start and finish banner has been redesigned, featuring hexagon patterns behind the Mario Kart logo in light blue, and on the two neon pillars (previously one) supporting the banner. The new Bowser insignia that is now used in this course is also modeled around a hexagon. It is now possible now to hit the banner (causing the banner to spin), like in Mario Circuit, DS Wario Stadium, Tour Tokyo Blur and 3DS Rock Rock Mountain.

The blimp with a screen on it has been removed. Billboards now show an animated picture of the name of the course, along with Bowser in it, instead of displaying an ongoing video of the player's point of view, an animated ad, and a still picture of Bowser. The signs and animated picture display the text "Neo Bowser City", even in non-American versions, where the name of the course is different. A similar discrepancy occurs in 3DS Music Park (called "Melody Motorway" in the British English version). The rails with scrolling neon arrows have been redesigned into neon rails with light arrows on top of them.

The overall course layout follows the same path, but has received a few minor modifications. A trickable drop-off has been added at the entrance to the tunnel in place of a downhill slope. The three-quarter turn into the glider ramp at the end has been modified into an anti-gravity section, complete with spin boost pillars, while the water puddles have been removed. The beginning of the turn is also a rounded 90° turn instead of it being circular. The Koopa Clown Car air current found near the S-bend has been moved to behind the banner, instead of beside it. The music is also roughly the same, similar to 3DS DK Jungle, Wii Grumble Volcano and Wii Mushroom Gorge, though electric guitar has been added. Bowser's minions - Koopa Paratroopas, Dry Bones, Hammer Bros., Fire Bros., and Boomerang Bros. are spectators in this course. In addition, like in the rainy courses in Super Mario 3D World, rain drops flow down the screens of both the GamePad and the TV, just to add a minor effect. 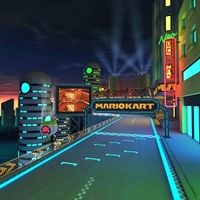 Neo Bowser City reappears in Mario Kart Tour, starting with the Tokyo Tour. Appearance-wise, it features elements taken from both its Mario Kart 7 and Mario Kart 8 versions, though it contains more cues from the former due to its lack of anti-gravity. The city now has more gray and navy hues than blue, the screen near the starting line now shows four players racing, and the bridge is now a glass tunnel. Some buildings have been redesigned to resemble more traditional Bowser castles, while neon signs with the course name can be seen throughout the track. The rain is only present if the game is not in battery saver mode. In addition, some of the Bowser insignias have reverted back to their standard appearance, while others keep their Mario Kart 8 appearances. As with other courses in the game, Neo Bowser City has a reverse variant, a trick variant, and a reverse/trick variant referred to as Neo Bowser City R, Neo Bowser City T, and Neo Bowser City R/T respectively; the former two were introduced alongside the regular variant in the Tokyo Tour, while the latter was added in the 2020 New Year's Tour. This course is a favorite of Bowser, Bowser Jr., Ice Bro, Luigi (Golf), Dr. Mario, Cat Luigi, Rosalina (Chef), Waluigi (Bus Driver), Funky Kong, Dry Bowser (Gold), Birdo (White), and the Cat and Ice-Cream Mii Racing Suits. It is also a favorite of Rosalina (Halloween), Luigi (Vacation), Bowser Jr. (Pirate), and Chargin' Chuck (Gold) if they reach level 3, and Pauline if she reaches level 8. The LED bulletin board features Mario driving in the S section.

"This is a remastered version of the music from the Nintendo 3DS title. It began life as an arrangement of the music for a circuit course on Mario Kart 7. Then while we were working on it, for some reason, we decided to add a particular phrase, and all agreed that it worked pretty well."