Mushroom Gorge is the third course of the Mushroom Cup in Mario Kart Wii. The course is located on a mountainous zone with tall Mushroom Platforms rising over cloudy pits. Racers travel the course mainly on land; however, on a part of the course, they enter a cave where they find a pit full of Mushroom Trampolines, which are mushrooms the racers use as platforms. Players can drive two different ways over these mushrooms to cross the cave. Red Mushroom Trampolines cause drivers to bounce, so players can do a trick while they are in the air to get a small boost of speed later. The green-capped Mushroom Trampolines, however, do not cause vehicles to bounce. Some Goombas appear serving as obstacles on the track. 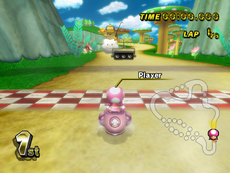 Toadette in the beginning part of the track

The track begins on a dirt road with Mushroom Trampolines and Mushroom Platforms in the background. There is a slight turn to the right and another to the left, which brings racers to a wooden bridge that curves right. After that, there are Item Boxes for the player to take and a jump with a single red Mushroom Trampoline, hanging over an abyss.

After exiting the cave, there is a left U-turn around an abyss. Goombas are on this part of the track, which act as obstacles. After passing the Goomba section, the player reaches is the finish line.

Daisy grinding on the mountain

In Mushroom Gorge, there is a shortcut that allows the player to speed past the regular curving route and get a boost. It can be performed without a mushroom (by jumping over the thinnest part of the grass and turning slightly right after bouncing off the first Mushroom Trampoline). After starting the race, the player should head to the left through an area with no fence and use a mushroom boost (or jump) to drive off the cliff and bounce off the Mushroom Trampolines below, landing on the bridge. This shortcut is utilized in a glitch where racers turn around and bounce off the first Mushroom Trampoline and lean back to climb on the cliff, moving left for a while before being dropped onto the track before the finish line. Because of this, the deliberate shortcut and two Mushroom Trampolines were removed in Mario Kart 7. These Mushroom Trampolines return in Mario Kart 8 Deluxe, but if the player attempts this glitch, Lakitu will simply pull them back to where they last were on the track.

Also, by the last U-turn, if the player cuts across the grassy patch with some sort of speed boost and doesn't fall into the crevice, there is a time gain of a second or two. Players can also use a mushroom and jump across the gap itself. It is also possible to bounce off the final Mushroom Trampoline on the left side of the cave and climb on the left wall and get onto the other side of the gap; a Mushroom boost is required. In Mario Kart 7, this can be done with the glider, but is much harder and costs time.

Whether intentional or not, hitting a jump boost will allow the racer to drive and drift off-course without losing speed. This status is removed after bouncing off a Mushroom Trampoline.

One more glitch can be done, but this one requires a Bullet Bill (only possible in the Wii version). When the player gets it, they must go into the cave and drive to the wooden ramp. When they perform a jump boost right on it, they must activate the Bullet Bill. This can be done in any position. After the Bullet Bill flies them to the end of the cave, the player should go into the grass right near the finish line and will notice that their speed will not slow down, thus negating the off-road debuff and saving time. However, this glitch wears off when the player jumps onto another Mushroom Trampoline.[citation needed]

Mushroom Gorge reappears in Mario Kart 7 as the third race of the Shell Cup. Due to graphical limitations, the Mushroom Trampolines are flat and larger than in Mario Kart Wii, and most of the ones in the background have been removed. The arrows at the first split paths have been changed from brown to red. Some of the Dash Panels have been shifted around, with an extra one being added to the first split track section, and the one on the right at the split paths has been moved forward.

View of the starting line

Mushroom Gorge returns in Mario Kart Tour as a classic course starting from the Mii Tour. It is the third Wii course to be included in the game and the first since Wii DK Summit in the Snow Tour twenty-seven tours prior. The course has received a graphical update. The starting line has been redesigned into a stone archway with the modern Mario Kart logo. Most Mushroom Trampolines have been restored to the background. Certain elements, like the elevation of the Mushroom Trampolines and the types of ramps used in some locations, had to be changed to accommodate for Mario Kart Tour's physics; there is also an additional Mushroom Trampoline in the cave section compared to the Mario Kart 7 incarnation of the track. Players can also now perform Jump Boosts by dropping off Mushroom Platforms. There is no longer a Dash Panel on the first or second ramp of the course. One of the three Goombas near the end of the course has also been removed. As with other courses in the game, Mushroom Gorge has a reverse variant and a trick variant, referred to as Mushroom Gorge R and Mushroom Gorge T respectively. In the reverse variant, the Mushroom Platforms and Trampolines in the cave are replaced by blue Mushroom Trampolines.

Mushroom Gorge reappears in Mario Kart 8 Deluxe as part of the second wave of the Booster Course Pass. It is the third course of the Propeller Cup. It uses its appearance from Mario Kart Tour, albeit with graphical updates. The yellow road is now orange. Additionally, several features of the original Mario Kart Wii version of the track that were not in the Mario Kart 7 and Mario Kart Tour versions return in this game, such as the shortcut at the beginning with two lower Mushroom Trampolines appearing leading up to the bridge (though the first mushroom now requires the aid of a Mushroom or a Super Star to reach it), along with the ability to jump across the gap at the last U-turn of the track using a speed boost. The mushrooms in the cave section are placed at different elevations again, like the versions prior to Tour, and the layout of the mushrooms in the cave section is now based on the original version, albeit with the green Mushroom Platform on the left path being replaced by another Mushroom Trampoline, as well as replacing one of the mushrooms with Mario Kart 7's glider mushroom.

One of the red mushrooms on the right side of the split path before the cave was removed. Several Toads and Koopa Paratroopas have been added as spectators on the course, and the eagles from Shy Guy Falls are visible flying above the track. The mushroom shortcut at the beginning of the course is now shown on the minimap. In a similar vein to 3DS Neo Bowser City, 3DS DK Jungle, and Wii Grumble Volcano, the music is almost the same as the original Wii version, save for the addition of a reverb effect and different mixing, which notably makes the backing guitar louder and adjusts the volume of certain sections of the song.

The second tournament of June 2008