Mario Tennis Open is a sports game for the Nintendo 3DS and the fifth direct installment of the Mario Tennis series (developed by Camelot Software Planning). The game features gyroscope support and online multiplayer (using the Nintendo Network procedures). This is the first handheld installment in the series to not include a Story Mode or RPG elements and the first handheld installment with a Tournament mode. This game is also the first Mario game to use QR (Quick Response) codes. In this case, it is used to unlock playable characters and the Yoshi costume. The game requires 2019 blocks to download from the Nintendo eShop. 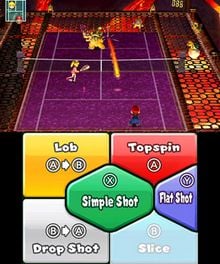 The gameplay features the traditional basic elements from the previous Mario Tennis games. To win, the player must score points by hitting the ball into the other side of the court and bounce twice, the basic objective of tennis. Players earn 15 points for every shot that is successful and can win the game by earning set, game, and match points by earning 60 points on each game. The number of sets and games can be changed by the player in exhibition mode but not in tournament mode.

This game uses the buttons of the 3DS during single or multiplayer matches, though players can perform various tennis shots by selecting the shot panels on the touch screen, which will light up to alert the player of the best shot to use in a given situation. By holding the 3DS vertically, players can make use of the aforementioned gyroscope support, disabling 3D functionality. This places the camera behind their character, whose movement becomes automatic, and allows players to control the direction of their shots based on the position of the console. The gyroscope support can be disabled either by holding the console horizontally or by disabling it in the Options menu. There are also Special Modes in the game, such as "Super Mario Tennis", where the player needs to hit enemies, blocks and coins with tennis balls in some levels of Super Mario Bros. 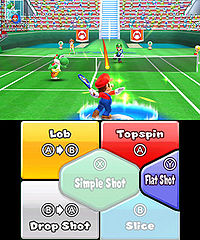 Chance Shots can appear if the opponent performs a bad rebound. In that case, a small colored area with a symbol of a Mario enemy or item appears in the player's court. The color of the symbol matches the colors of the panels in the touch screen (if the touch screen is set to the 6-panel shot panel). To perform a chance shot, players have to perform a shot whose color corresponds to the colored area when they are in that spot, either by pressing the correct button or button combination or by touching the matching color on the touch screen. Otherwise, the shot is a normal one. However, players can perform a simple shot that automatically selects the appropriate shot, but this Chance Shot is slightly weaker.

Players on the receiving end of a Chance Shot experience special effects that can hinder them. However, they can lessen the effect by pressing the opposite shot. For instance, red Chance Shots may not make much of an impact if the player retaliates with a (blue) slice shot. The recommended counter button is lit up for the receiving player.

Here is a list of Chance Shots and their effects.

All of the Trophies from all the Cups in the Records Screen.

Tournament mode is very similar to that in the previous Mario Tennis games. However, two more cups are added and are arranged differently. Players must have a star ranking to participate in the second set of cups. To do that, they must beat the Champions Cup. However, in the Doubles Tournament, only the character they control earns the star rank. Beating Champions Cup unlocks the Pro difficulty, which is more difficult than Expert, while Final Cup unlocks Ace, the most difficult COM level for Exhibition Mode.

Once the player has unlocked a cup, they can play it at any time, using any character. As a result, characters do not have to clear all three cups to beat the Champions Cup to earn the Star Rank, unlike in previous titles. Like in the previous titles, though, computer opponents will not use the hidden characters in Tournament. 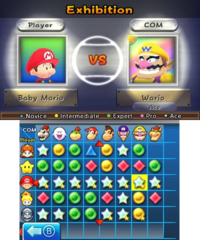 The records for previous exhibition matches.

Similar to the preceding Mario Tennis games, exhibition mode is a basic versus mode. Players can choose a singles or doubles match. After that, they can choose their character (and teammate, for doubles) and opponents and press the

to give characters a left-handed dominance or a star rank, respectively, if they want. The opponent's CPU's difficulty can be chosen after that, ranking from lowest to highest: Novice (blue triangle), Intermediate (yellow circle), Expert (green circle with dot in the middle), Pro (red diamond), and Ace (rainbow star). The Pro and Ace difficulties are unlockable by winning the Champions Cup and Final Cup, respectively. After this, players can pick any court they currently have, and they can select the number of games and sets. Then, the match starts. Chance Shots cannot be turned off, unlike Power Shots from Mario Power Tennis. 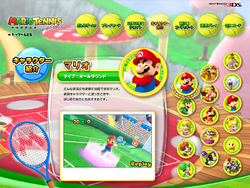 The character roster on the official Japanese website, not including the QR code characters

There are a total of 25 playable characters in Mario Tennis Open. Thirteen are available from the start, four are unlocked by completing level 3 of their respective Special Games, while the remaining eight, Metal Mario and alternate-colored Yoshis, are unlocked by scanning QR codes. Additionally, each character will be in one of the six player classes available in the game, excluding the Miis as they can be customized. Aside from Miis, new playable characters introduced to the Mario Tennis series in this game are Baby Peach, Dry Bowser, Luma, and Metal Mario, while the other-colored Yoshis are separate playable characters after being tied to Yoshi's Rolling Egg Return in Mario Power Tennis. In addition, Baby Mario is playable for the first time in the series since the Game Boy Color installment, while Daisy, Diddy Kong, Boo, Bowser Jr., and the other-colored Yoshis are playable in a Mario Tennis game for a handheld console for the first time after previously being playable in at least one home console installment.

Characters are split into six categories of types depending on their stats. 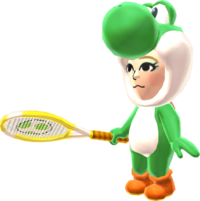 The Yoshi costume that the player can unlock by scanning the appropriate QR code.

In Europe, a Yoshi QR Chase was set up in 30 participating ASDA stores, and in participating EB Games and JB Hi-Fi stores in Australia and New Zealand. This special QR event allowed consumers to scan the code via the game to unlock certain Yoshis to play as. All countries where the game has been released have all QR codes in regards to the colored Yoshis.

Although not part of the Yoshi Hunt, a Yoshi costume (pictured right) can also be unlocked for the player's Mii by scanning a specific QR code.

In order for the player to scan a QR code, they must go the file select screen and press

. However, a save file must be created first before they can scan a QR code.

Gear may be bought for the player's Mii with coins that that are earned by playing Special Games. They can be bought at the Clubhouse for a certain amount of coins each and alter the Mii's statistics. Costumes can also be unlocked by meeting certain conditions, such as giving characters a star rank.

Mario Serves Up Portable Tennis Fun in 3D! In Mario Tennis Open, Mario and his Mushroom Kingdom friends return to the court for a flurry of intense tennis action, from engaging singles and doubles matches to skill-building minigames and online play. Using the built-in wireless features of the Nintendo 3DS system, up to four people can play together in local or online multiplayer modes and exchange player information via StreetPass. Players can choose between intuitive touch-screen and gyro sensor controls or strategic button-based game play that delivers an even deeper experience. Players can also choose from a variety of playable characters or use their own personalized Mii character as they serve, volley and smash their way up the leaderboards.

MARIO TENNIS OPEN on Nintendo 3DS offers players tactical tennis with depth like never before! Use buttons, the Touch Screen or new gyro controls ‐ perfect for beginners! Play online against friends or challengers from your region and work your way up the leaderboard to become champion. Exchange data with other users via StreetPass and customise your player with any coins you win.

Mario Tennis Open received mixed to positive reviews from critics, with aggregate websites Metacritic and GameRankings giving the game a 69 based on 58 reviews[1] and 69.26% based on 38 reviews.[2] Critics often cite that while the title is considered a solid title, they lament that it plays and feels too similarly to previous titles in the series, with Chance Shots not greatly improving or changing the gameplay up to make the title stand out, and the game was overall a disappointment. Reception towards the Mii customization was mixed; the overall customization was praised, but the pie-chart system of viewing stats has a universal negative reaction. Some critics complain that Miis receive too much focus compared to the Mario series characters as well. Praise has been given to the Special Games, however, especially the Super Mario Tennis Special Game.

Eric L. Patterson of Electronic Gaming Monthly has felt that while the title is a solid one for any Mario Tennis fan, it is not a great Mario Tennis title, and gave the game a 7 out of 10.[3] Richard George of IGN has concluded that the game is "Okay", acknowledging that, "Camelot’s decade of tennis experience means they understand how to make the sport engaging and addicting...Yet Mario Tennis Open struggles in just about every other regard.", where the score is a 6.5 out of 10.[4] Griffin McElroy of Polygon has lambasted the Chance Shots system in his review, calling out the over-reliance on them and their random spawning.[5] On a more positive note, Matt Helgeson from Game Informer has given the game an 8/10, appreciating how Mario Tennis Open goes back to the basics due to him disliking the Power Shots feature of Mario Power Tennis, and that the game introduces online to the series.[6]

Camelot Software Planning, which has developed previous Mario Tennis and Mario Golf titles, also worked on this title. The director was Shugo Takahashi while the lead designers were Hiroyuki Takahashi and Shugo Takahashi, as with the previous installments of the Mario Tennis series. Motoi Sakuraba composed the music. Mario Tennis Open has a different set of announcer voices for each version, a rare aspect in a Mario game. The executive producer was Satoru Iwata, the president of Nintendo while Shigeru Miyamoto was the supervisor.