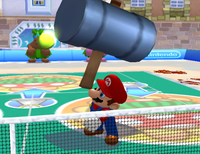 Iron Hammer is Mario's Offensive Power Shot in Mario Power Tennis and Mario Tennis: Power Tour. Mario summons a huge Hammer and hits the ball with tremendous force with flames trailing behind it. This will knock the opponent to the far back of the court and leaves it open to a drop shot. If Mario returns any Offensive Power Shot with Iron Hammer, Mario will not suffer from any knockback, but other effects may still apply, such as electrocution or being forced to lunge. Being hit with this Power Shot will also cause the opponent to lose a portion of the energy they need for Power Shots, increasing the time it takes for them to get another Power Shot or lose a Power Shot they may have stored.