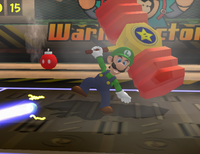 Squeaky Mallet is Luigi's Offensive Power Shot in Mario Power Tennis and Mario Tennis: Power Tour. Luigi pulls out a huge squeaky Hammer similar to Mario's Iron Hammer and hit the ball with great force, leaving a path of small green, yellow and pink stars. This shot returns as a Slice. Returning this Power Shot with anything other than a Defensive Power Shot will knock the opponent back about a quarter of the court, reverse the opponent's movement controls for about one second, and reduce the opponent's energy needed for Power shots, causing them to lose whatever Power Shot they may have stored and making them need more time to store up another Power Shot. If Luigi returns another power shot with the Squeaky Mallet, he will not suffer from any knockback, but other effects such as loss of Power Shot energy and secondary effects such as electrocution and control reversal will still apply.

Although not as fast and powerful as Mario's Offensive Power Shot, it has better recovery time and is a bit more curved. The stun time after contact is also greater. However, if Luigi is trying to return a ball that is low and close to the net (i.e. drop shots), the ball could hit the net or go out of bounds by this power shot, which would hinder Luigi more than help him.

The Hammer that Luigi wields may be a MiniMega Hammer from Mario Party 4 with a star painted in the center instead of a Mushroom. The green and pink stars may also represent the Super Mega Mushrooms and Super Mini Mushrooms.