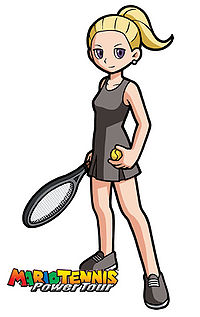 “You're Alex, right? You're right on time. Impressive. I'm Emily. I teach tennis here at the Royal Tennis Academy. But...are you OK? Did something happen? Did you hit your head?”
—Emily, Mario Tennis

Emily with Mark in Mario Tennis

In the Game Boy Advance game, she's the coach of the Senior Class. Here, Emily is shown to be a very serious person who can see potential quite easily, but is careful to avoid making players overconfident. But she also mentions that a lack of confidence makes her uneasy.