Stanley, also known as Stanley the Bugman[1][2][3][4] or Stanley the bugman,[5][6][7] is a bug exterminator that first appeared in the Game & Watch game Green House. In this game, Stanley uses his spray gun to defeat hungry pests. He later enters the Donkey Kong franchise as the protagonist of the game Donkey Kong 3, in which he battles with Donkey Kong and several insects in a greenhouse with his spray. Stanley confronts Donkey Kong again in Donkey Kong 3: Dai Gyakushū; however, it is not known what succeeded these events. 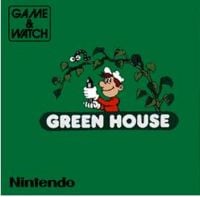 Stanley the Bugman first appears in the 1982 Game & Watch game Green House. While the manual refers to the playable character only as the "Fumigator,"[8] print ads and TV commercials refer to him by name.[1][9][2] Stanley must defend his plants from inchworms and spiders that seek to devour his flowers. Unlike his later depictions, he appears much taller in character artwork. He wears a white cap, a red shirt, and khaki trousers. 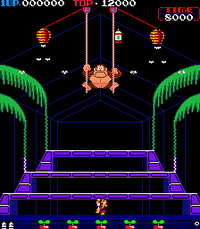 Stanley reappears as the protagonist of Donkey Kong 3. Stanley works as a simple fumigator when Donkey Kong and various insects attack his greenhouse. In order to put a stop to Donkey Kong, Stanley needs to spray him and the insects with his sprayer while also trying to keep the bugs away from his plants. After pushing Donkey Kong up into a beehive, Donkey Kong flees to another greenhouse and Stanley chases after him in order to continue driving him off. In the arcade version, the bugs eat Stanley if he is defeated by one, while in the NES version, the bugs do not eat him, and instead simply disappear. His current appearance of being short, round-faced, bucktoothed, and clad in overalls is established in this game.

Stanley is once again the protagonist of the 1984 semi-sequel to Donkey Kong 3, Donkey Kong 3: Dai Gyakushū. His role is very similar to Donkey Kong 3 in that he must spray Donkey Kong to the top of the screen and while also blasting the invading bees, although this time there are no plants to protect, nor are there any multi-level platforms. These changes make for something that is somewhat akin to Galaga.

In the Game & Watch version of Donkey Kong 3, Stanley's greenhouse is again attacked by Donkey Kong, who this time has a sprayer of his own. Donkey Kong and Stanley stand at opposite ends of the greenhouse and spray at the bees to move them toward one another and get them to sting the other. 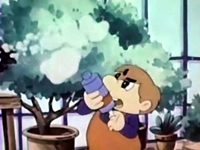 Stanley as he appears in "Greenhouse Gorilla"

Stanley made an appearance in the television series Saturday Supercade, in the Donkey Kong episode "Greenhouse Gorilla," where he is the owner of a greenhouse. Here he is seen taking care of a carnivorous plant called Herman, but then a thief (only referred once as Mr. X) steals it while Stanley is occupied with spraying a bug. The thief then convinces Donkey Kong that Stanley is the one who wanted to hurt the plant, so he starts throwing beehives at him. Once again, Stanley is too occupied fighting the bugs and lets the thief and Donkey Kong run away with Herman. Stanley then joins forces with Mario and Pauline and starts chasing them. After a confrontation at a supermarket, and one at a manor where a "grand ball" was taking place, Pauline convinces Donkey Kong that the thief is the evil one, so they finally defeat him with the ape's help. The thief is finally arrested and Herman returns to Stanley, but Donkey Kong runs away once again. 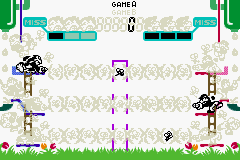 A port of Green House appears in the Museum of Game & Watch Gallery 2.

There are two ports of Greenhouse in Game & Watch Gallery 3. The Classic version is faithful, but the Modern version replaces Stanley with a Yoshi.

Stanley appears in Game & Watch Gallery 4 as a playable character in a port of the Game & Watch version of Donkey Kong 3. A modernized version is featured; however, it is set in a Ghost House rather than Stanley's greenhouse, Mario replaces Stanley, and Boos and fireballs replace the bees. 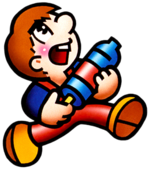 Stanley appears in Super Smash Bros. Melee as one of the many collectible trophies. His overalls are white instead of red but his shirt remains blue. Mr. Game & Watch also uses the sprayer as a weapon called Greenhouse, matching its first appearance, and continues to use it in later games in the series as his neutral attack.

Stanley appears as a playable character in one of 9-Volt's Microgames in WarioWare: Twisted!, named Donkey Kong 3. Here, he must do as he did in Donkey Kong 3 and spray Donkey Kong until he gets his head stuck in a beehive.

Stanley appears in 9-Volt's Microgame Donkey Kong 3 in WarioWare: Touched! In this microgame, the player must blow at the microphone to make Donkey Kong move to the top; instead of spraying Donkey Kong, Stanley blows clouds out of his mouth to make him move into a beehive.

Stanley appears in Greenhouse, one of 9-Volt's microgames in WarioWare: D.I.Y.. He has to defend his plants from two worms.

Stanley appears in DK 3, one of 18-Volt's Microgames in WarioWare: D.I.Y. Showcase, where the goal is the same as his WarioWare: Twisted! appearance.

A port of Green House can be found in Game & Watch Collection for the Nintendo DS.

Stanley reappears in NES Remix as the playable character in various Donkey Kong 3 based challenges, which only appear in the Bonus stages.