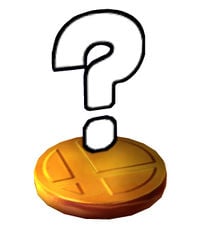 A trophy in Super Smash Bros. Brawl. (This shows how the trophy looks if zoomed in on before being caught - a trophy with this appearance does not exist.)

Trophies are collectibles found throughout the Super Smash Bros. series. 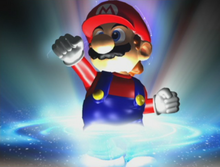 There are many ways to collect trophies in the Super Smash Bros. series. Common trophies can be collected by finding them in some Adventure mode stages or Smash Run, by getting them in a Classic mode bonus stage, by getting them in a lottery in Melee, by playing Coin Launcher in Brawl, and by playing Trophy Rush and Target Blast and buying them in the Trophy Shop in 3DS / Wii U. Some trophies can only be unlocked by completing certain event missions. To unlock trophies of the fighters (except for the alternative trophies in Wii U, which are common trophies), players must complete Classic, Adventure, or All-Star mode. Once a trophy is collected, it can be viewed in either the Trophy Gallery, where players can closely observe a trophy and read a description of it, or the Trophy Hoard, where all of the trophies the player has collected will be displayed together. In addition, in Brawl and Wii U, players can take photos of their trophies with the Photo Booth feature.

There are a total of 293 trophies in Super Smash Bros. Melee. However, three trophies are exclusive to the Japanese version, two of which were only available through Japanese events. These trophies otherwise cannot be obtained via normal gameplay.

There are a total of 544 trophies in Super Smash Bros. Brawl.

Trophies return in the fourth installments of the series, Super Smash Bros. for Nintendo 3DS and Super Smash Bros. for Wii U. Like the stages in both games, trophies in the Nintendo 3DS version are mostly from handheld games, while trophies in the Wii U version are mostly from home console games.[1] It was mentioned that even the Nintendo 3DS version alone contains more trophies than Super Smash Bros. Brawl did.[2] There is a "Trophy Shop", where trophies can be purchased by either coins from battles or Play Coins. Some of these trophies can also occasionally be purchased at a discount. Including DLC, the 3DS version has a total of 707 trophies, while the Wii U version has 743. The descriptions of the trophies, unlike in Melee and Brawl, are written in a more jest and tongue-in-cheek manner.

Trophy coverage on other NIWA wikis: