This article is about green fireballs used by Luigi. For the enemy from Mario Bros. that sometimes appear green, see Fireball (obstacle).

A Green Fireball (or green fireball)[1] is a projectile and Luigi's trademark element in most spin-off games. Occasionally, it is functionally identical to Mario's Fireball.

Green fireballs first appear as obstacles in Mario Bros., where they randomly appear on one side of the stage and move towards the other side. 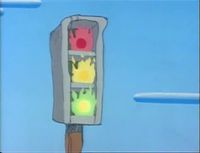 A green fireball in the Super Mario World television series

A green fireball appears in the Super Mario World television series episode "The Wheel Thing", representing the green-light signal in the fire traffic lights. When Mega Mechanasaur passes the traffic lights without stopping from the lit-up red fireball, the green fireball along with the red and yellow ones get shot out towards Mega Mechanasaur, breaking off its arms.

Green fireballs are first attributed to Luigi in Super Smash Bros., appearing as his standard special move. The move is called Fireball, the same name as Mario's move, but it floats while drifting around in a circle, rather than bounces. Kirby can use green fireballs if he copies Luigi's ability.

Green fireballs reappear as Luigi's standard special move and when Kirby copies his ability in Super Smash Bros. Melee. Metal Luigi can also use green fireballs during his boss fight alongside Metal Mario. 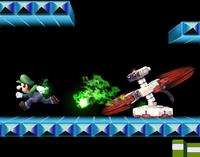 Green Fireballs reappear in Super Smash Bros. Brawl, where False Luigi in the Great Maze can also use them.

Luigi's Fireball in Super Smash Bros. for Wii U

Green Fireballs return in Super Smash Bros. for Nintendo 3DS and Super Smash Bros. for Wii U, where they can be altered into either Bouncing Fireball or Ice Ball via custom moves, provided that they are unlocked first. Bouncing Fireball is affected by gravity with each successive bounce decaying in height, much like Mario's Fireball, although Luigi takes more time to fire it. In comparison, Ice Ball has a chance of freezing opponents and has longer range, but deals slightly less damage and travels slower. When Kirby copies Luigi, he will always remains with Luigi's default standard special, even if Luigi has a set custom move.

As Master Shadow can copy characters and their abilities, he can also copy Luigi to shoot Green Fireballs as well.

Green Fireballs return in Super Smash Bros. Ultimate, where Dharkon's Luigi clone can also use them in its boss battle in the World of Light.

Green fireballs appear in Mario Kart: Double Dash!!, as Luigi's Special item and can be used only by him; not even Petey Piranha or King Boo can use it. It works similarly as Mario's Fireball item. When Luigi throws it either forward or backward, the green fireball splits into five and bounces around the course, which may ricochet off walls. The fireballs, when they hit any kart, including Luigi and his teammate's kart, cause the kart to spin out and the rear player is burned and momentarily stunned. If a green fireball hits a racer under the effects of a heart, the icon for the green fireball received is a red fireball.

As well as having the special item, Luigi has a personal kart, the Green Fire, unlocked once players beat Mushroom Cup on 50cc.

Undead green fireballs known as Phantom Embers appear as enemies in Paper Mario: The Thousand-Year Door. They can also spit green fireballs that hit either Mario or his partners, which causes five attack points, and they can sometimes set Mario (or his partner) on fire. 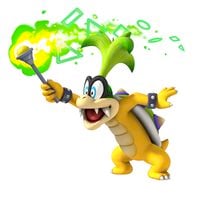 in New Super Mario Bros. Wii, Iggy Koopa shoots Green Fireballs from his magic wand to attack Mario and co. The speed of these fireballs are the fastest in the game, along with Morton's.

When Mario and co. encounter Iggy again in the World 5-Castle, he still shoots Green Fireballs from his magic wand, although not as fast as in his first battle.

Green Fireballs once again return in New Super Mario Bros. U, New Super Luigi U, and their Nintendo Switch ports. This time, Iggy waves his wand and shoots three fireballs while standing on the ceiling, some being his usual green flames, and some instead being red orbs that generate Magmaarghs when they land into the lava below.

Green Fireballs appear from Iggy, who was added to Super Mario Maker 2 in the version 3.0.0 update released on April 22, 2020. Iggy once again shoots Green Fireballs only in the New Super Mario Bros. U style, while other styles excluding Super Mario 3D World (as the Koopalings are not available in that style) use green ring-shaped spells instead.

Green fireballs are used in Super Mario Strikers. When Luigi or Yoshi uses their Super Strike, the ball will be encased in a green fireball while launching at the goal.

The Green Fireball, again simply known as the Fireball, is Luigi's Star Skill in Mario Superstar Baseball. When pitched with, the Green Fireball surrounds the ball with green fire and throws it as a fastball with very high velocity and little movement. Compared to Mario's equivalent Fireball pitch, it has slightly lower velocity and greater movement, matching Luigi's specialties as a pitcher. When batted with, the Green Fireball also surrounds the ball with green fire, hitting it as a ground ball to the infield. Players who attempt to catch the ball while it is lit are burned, stunning them for a short time.

In Challenge Mode with Mario, the player must purchase the Green Fireball item in order to enable use of this ability for Luigi. 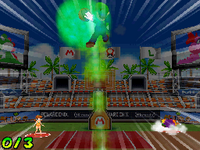 A Green Fireball is used in Mario Hoops 3-on-3, as Luigi's Special Shot known as the Green Fire Shot, identical to Mario's Fire Shot. When the player taps out the letter L on the touch screen, Luigi starts charging the ball with green fire. If he is not hit while charging it, he launches the ball to the basket.

Green Fireballs reappear in Luigi's Mansion 3. While Morty is filming during the boss fight, after the Goob in the monster costume is damaged twice, he will eventually shoot a green fireball. Once Luigi starts to exhale the green fireball, the Goob will retaliate with a stronger breath that requires Gooigi's help to overcome. For the final hit, the Goob retaliates to the redirected fireball by blowing even harder than before, requiring the player to press

repeatedly to force the green fireball into the foe one last time. If successful, the monster costume is destroyed by the blast.