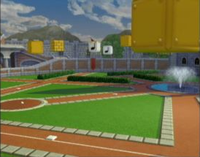 Peach Garden is a stadium in Mario Superstar Baseball. It is just outside Peach's Castle, set in Peach's Garden (hence the stadium's name). Peach Garden is home to her respective team in Challenge mode. If one is controlling a team other than Peach's, all games against her will be played here. The stadium also hosts Wall Ball, a minigame involving pitching. The music that plays here is an orchestral version of the Super Mario Bros. Ground Theme.

The stadium appears in the intro during the game between Peach and Yoshi's teams, where Peach makes a hit and as Yoshi goes for the catch, the ball bounces off a Note Block and onto the bleachers, much to Yoshi's disappointment.

The stadium does not appear in Mario Super Sluggers; Peach's home field in that game is Peach Ice Garden.

Peach Garden is the largest stadium in Mario Superstar Baseball, and thus is more of a pitcher-friendly park. The left and right field walls are the farthest of any in the game. The outfield wall is also unique because the center field wall (the edge of the castle) is closer in than the power alleys. Only Wario City in Mario Super Sluggers shares this trait.

Despite being closer in, the center field wall is a challenge to hit over due to its towering height. Hits to center that may be home runs in other parks will sometimes bounce of the wall here. A homerun is only achieved to center when the ball lands on the red section of the roof. Players can be aided by Jump Blocks that cause the ball to bounce higher and farther if hit on the top. Although they are not as high, the right and left field walls are comparable because they are farther.

This is the only stadium where the right and left fielders must cover more ground than the center fielder. Strategically speaking, the slowest outfielder may actually be chosen to play center in this park because of the smaller area that right or left field. Despite center field being relatively small, the outfield is overall the largest of all stadiums in the game. Right and left field require far more range from its fielders than any other stadium.

Along with Mario Stadium, Peach Garden is the only other stadium to feature a crowd. They are usually not seen during standard gameplay but can be heard cheering and the stands with fans are visible in replays. The lower level is completely covered on top. Both the upper and lower decks occupy the space behind home plate and extend down the lines to about first and third base. Unlike Mario Stadium, there are no seats in the outfield.

In the background a portrait of Princess Peach can be seen behind home. There is also an image of Peach on the stained-glass window or the castle in center field.

The stadium has many Jump Blocks, hanging in the air. If the ball hits the block on the side, it will bounce back the way it came, which can both aid or hurt the batter. However, if the ball bounces on the top, then it will fly higher and continue its trajectory forward. The batter is more likely to get a homerun in this scenario.

The stadium also features invisible blocks that only appear when struck by the ball. The stadium is also covered with hedges, spread across the ground, making it harder to find the ball. Players can run through these hedges with no changes in speed or movement, but it can make fielding slightly more challenging nonetheless. There is a fountain located in center field.