Not to be confused with DK Jungle (baseball stadium). 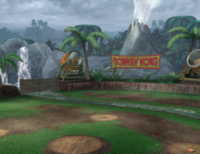 Donkey Kong Jungle is the name of a baseball stadium that appears in Mario Superstar Baseball. It is Donkey Kong's stadium. The stadium takes place in a jungle, with a river passing through the stadium. Although the stadium is still a standard Baseball field, the river is full of Klaptraps, who will try to bite the fielders, making them slow down. There are also two Barrel Cannons, which are located on both sides of the back of the arena. They shoot out Barrels at the fielders, which immobilize them for a few seconds. There is no real threat to the batters. A large billboard featuring Swanky Kong as well as his tent and an abandoned Millstone can be seen in the background. In Challenge Mode, Donkey Kong's Team are challenged in Donkey Kong Jungle. DK Jungle is also where the minigame, Barrel Batter, is hosted.