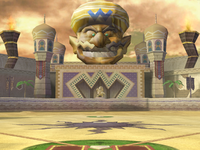 Wario Palace is Wario's baseball stadium in Mario Superstar Baseball. It is located in a desert near Bowser Castle. It has a giant, golden Wario head located on the stadium's wall, similar to the ones found in Wario World. There are also a few banners spread across the stadium, with a picture of Wario on them. Behind the foul line are two Chain Chomps, one on each side of the stadium. Although they are usually asleep, if awoken, they will attempt to attack any player that gets too close and can run outside the foul line. There are a few Star Pads underneath the sand, and if the batter hits the ball on it, they will get a Star Point. Additionally, just outside the sides of the infield lies two Cyclone Generators from Wario World. They will whip up a sandstorm if the ball falls underneath them, and will shoot the ball out in a random direction. A minigame is also featured in this stadium, named Chain Chomp Sprint.

Wario Palace is shown in the intro during the match between Wario and Donkey Kong's teams, where Donkey Kong catch the ball after he climbs up, only for a Chain Chomp to attack him. Later on, after Diddy Kong bunts the ball, Wario blows onto it to make it a foul ball, only for Lakitu to call it a fair ball.