Not to be confused with Bomb Derby. 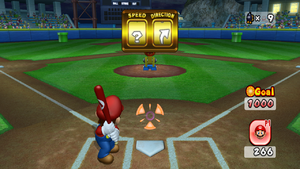 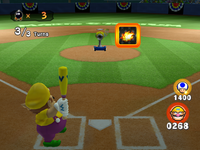 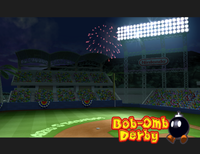 Bob-omb Derby is a minigame in Mario Superstar Baseball and Mario Super Sluggers. It is set in the Mario Stadium, and is played during nighttime. A roulette will start, and the player must press the A Button in order to stop it. It will land on a certain image, and a machine that looks like F.L.U.D.D. will shoot out a Bob-omb at the player. The player must then hit the Bob-omb, in order to score a Home-Run. A Home-Run is always succeeded, but sometimes it will become a Foul Ball for going past the boundary line.

The Bob-omb will be a different speed depending on the image:

The player can score more points if they keep hitting the Bob-ombs, without missing one. This is called a Combo. However, a combo can easily be thrown off if a Bob-omb is missed.

In Mario Super Sluggers, the F.L.U.D.D.-like cannon is replaced by a normal one. In multiplayer and Grand Prix mode, several players participate hitting balls to the sky. The gameplay is the same except players stop the roulette and there is a third roulette marked with the characters' heads on them. If the third roulette lands on the character's head, the character is given a chance to destroy the firework by throwing baseballs at the flying Bob-omb. If the character succeeds, points are awarded to that character while the batting player receives no points. The roulette can also make either all opponents throw baseballs at the flying Bob-omb or none, if it lands on the X.