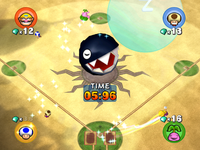 Chain Chomp Sprint is a minigame in Mario Superstar Baseball. Wario Palace is where this game is held. It involves four players (at least one has to be a human player), and they must collect jewels, which are spread across the four bases, within sixty seconds (ninety in Special Mode). The player with the most jewels in the end wins. Commonly, a large row of normal jewels will appear. Rarely, a large Red Jewel will appear on one of the bases. If it is collected, the player will earn ten Jewels. There is a Chain Chomp in the middle of the field, however, who will wake up occasionally. Each player must stop or else the Chain Chomp will tackle him or her, making the individual lose half the jewels. If players run into a Mushroom, they will run much faster, but this makes it more difficult to stop. They will also increase speed if the players have a high gem total. This minigame is also seen in Challenge Mode, where the player is against three Magikoopas.