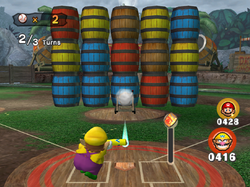 Barrel Batter is a Minigame located in the Donkey Kong Jungle in the game Mario Superstar Baseball. It is also available in Challenge Mode, and can be played in multiplayer with players taking turns. An Adobe Flash version called Barrel Blast was released through Camp Hyrule in 2005.

The player must hit the ball into the row of Barrels, which appear in front of the player. The Barrels come in three colors: blue, red and yellow. The more Barrels of the same color touch, the more points the player can score if they hit that color Barrel. After hitting a certain amount of Barrels, a Bob-omb Barrel will drop down onto the wall of Barrels. If it is hit on the first swing after it drops (which is very hard), then all of the Barrels will blow up, earning around 860 points and three extra balls. The player has to score as many points as they possibly can.