Bowser Castle is an unlockable stadium in both Mario Superstar Baseball and Mario Super Sluggers. It would seem that Bowser decided to build a Baseball Stadium inside his own Castle. In Mario Super Sluggers, Bowser Jr. Playroom transforms into this stadium at night time. It is also the stadium for the Bowser Monsters. 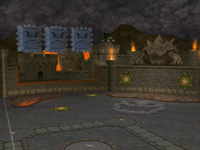 Bowser Castle as it appears in Mario Superstar Baseball.

In Mario Superstar Baseball, this stadium is unlocked for other modes in the game by beating Challenge Mode at least once and is the only unlockable stadium in the game. It has lava all over the stage, so Bowser has had to put a protective cage over the lava pits, as that players can walk over it. However, Lava Bubbles can still fly out of the lava pits, and will burn any player that gets hit. This will cause them to drop the ball, if they're holding it. Additionally, the stadium is very high, and there are a few Thwomps on the sides, that will try to block the ball, making it hard to get a Home-Run. In Challenge Mode, Bowser Castle is the last stadium in every players story (including Bowser).

When playing as Mario, Peach, Wario, Yoshi, or Donkey Kong, the five must beat all of the other players, and then they will have to challenge Bowser's team in Bowser Castle. When playing as Bowser, Mario and a group of eight other Captains (randomly chosen every time the teammate selection screen is loaded) will steal Bowser's Castle, after Bowser beats all the other teams. Bowser must then challenge them to a Baseball match. The stadium is also where Star Dash, a Minigame, is played.

Bowser Castle as it appears in Mario Super Sluggers.

The stadium reappears in Mario Super Sluggers, but depicting slight differences from its first appearance. Fireballs will now drip down and make large puddles on the ground, and they will burn the players who touch them. There is also King Bob-omb floating with the Koopa Clown Car, and throwing Bob-ombs across the outfield. In the background, there is a giant Bowser statue in the center field that will breathe fire to burn outfielders. The stadium is also where the minigame Bowser Pinball is played. This minigame is unlocked after Challenge Mode is complete. The background music for this stadium is a rearrangement of the Castle BGM from New Super Mario Bros.. The layout from the previous game is used for Bowser Jr. Playroom. It is the only unlockable stadium not dedicated to a sub-captain.