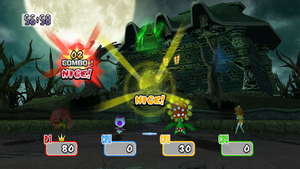 Ghost K is a minigame in the game Mario Super Sluggers for the Wii. The minigame takes place in Luigi's Mansion.

In the game, the object is to throw baseballs at generic ghosts from Luigi's Mansion. If the ghost matching the player's color is hit, the player gets more points. Also, if the player throws successfully consecutively, a consecutive bonus is awarded. Occasionally, a bigger ghost appears which takes many hits to destroy, getting smaller as it gets hit. All players can hit it, but only the person who defeats it gets points. Ghosts holding stars, or rarely Bob-ombs, occasionally appear. Whoever hits them gets the item. Stars make the player invulnerable, while bombs stun him or her for a couple seconds.