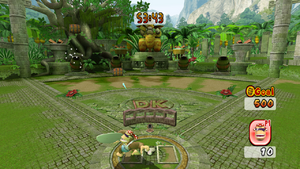 Barrel Basher is a minigame in the game Mario Super Sluggers for the Wii. It takes place in the DK Jungle stadium.

The player has to hit balls at barrels and Bob-ombs. It takes three barrels to break part of the shield, but only one Bob-omb. If the player is hit by anything, the minigame automatically ends in a failure, regardless of their score. The player has to either meet or exceed the number of points in the beginning levels, but, on Special Level, the player sets a high score with a time limit. The player can increase the time limit by hitting ten consecutive barrels. Players can control when to shoot out the ball and how they can control depending on the time they swing.

Several types of barrels appear in this minigame. The first kind is a brown barrel; it is worth the least amount of points and it is the slowest. The second kind is a golden barrel, which is slightly faster than a brown barrel and worth slightly more. The third kind is a blue barrel that rolls faster and is worth more points. The final barrel, only found in Special mode, is a huge, red barrel that must be hit five times before completely exploding. This barrel always appears in the middle cannon, and it can break through the barrier. If the barrel reaches the player before it is broken, the entire shield will be destroyed and the minigame ends automatically. Bob-ombs roll down the field, and when hit, they explode all barrels on the field.

In multiplayer and Grand Prix mode, the other players try to mess around with the batting player by placing plants that move the barrels around when touched by barrels. When a barrel successfully hits the plant, the player who placed the plant gets 50 points. The player with the most points after two rounds is the winner.