From the Super Mario Wiki, the Mario encyclopedia
(Redirected from Fire Ball)
Jump to navigationJump to search

It has been requested that this article be rewritten and expanded to include more information. Reason: Paper Mario series

This article is about the projectile used as a weapon by Fire Mario and various enemies. For other uses, see Fireball (disambiguation).

Fireballs first appear as obstacles in Mario Bros., where they randomly appear on the stage, moving and bouncing off the edges of the screen.

Fireballs make their debut as projectiles in Super Mario Bros., where Mario and Luigi can shoot these fireballs only if they acquire a Fire Flower. They are affected by gravity and bounce only on the ground. If they hit a block sideways or from the underside, they will usually explode. Most enemies can be defeated by one fireball, and Bowser can be defeated by five. Hitting Bowser and his fakes with five fireballs will defeat them and give 5,000 points; the latter seven will also reveal the common enemy that was in disguise.

Fireballs only appear in Super Mario Bros. 2 as enemy projectiles. Pansers shoot two fireballs at a time (gray/green ones shoot them straight up, while the others shoot them toward the player in an arc). Red and Green/Gray Birdos spit fireballs; the former also shoots eggs, but the latter does not, forcing the use of Mushroom Blocks to defeat them. Autobombs also shoot fireballs at players if Shyguys are on them.

Fireballs return in Super Mario Bros. 3, being usable projectiles again. Though Mario and Luigi aren't the only ones that can shoot fireballs, as Venus Fire Traps, Fire Brothers, and Fiery Walking Piranhas can also shoot fireballs from their mouths; these fireballs can be blocked if the Mario Bros. crouch while wearing a Hammer Suit.

Due to palette limitations in the NES version of the game, Mario and Luigi's fireballs appear green inside Toad Houses and cyan during Koopaling fights. 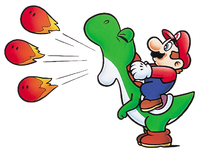 In Super Mario 64, flame throwers and Fly Guys spit fireballs at Mario when he is near them. The lava and volcano of Lethal Lava Land also spew fireballs at certain intervals.

Fireballs also appear in Super Mario 64 DS as a stream of Fire Breath with Yoshi's Power Flower ability. They are also found by swallowing flame throwers, Fly Guys and campfires.

Fireballs return in New Super Mario Bros., where they have the same function as in the previous game, when Fire Mario shoots fireballs. In the Mario vs. Luigi game mode, fireballs can stun a brother and knock a big star from him, but can defeat a brother in Mini form.

Fireballs reappear in Super Mario Galaxy as Fire Mario's projectiles; however, the form has a time limit, and though he can shoot more than two fireballs at a time, he cannot do so underwater. Kamella and Magikoopas also shoot fireballs from their wands (the former also spawns Green Shells), and King Kaliente and Roctos spit them and coconuts (the latter of which can be hit back at them).

Fireballs appear in New Super Mario Bros. Wii, appearing when Fire Mario shoots them. Fire Bros. also throw fireballs, and Fire Piranha Plants spit them out, melting any Ice Block in their way. Yoshi can also spit a giant Fireball (like in Super Mario World) by eating a fireball launched by a character with a Fire Flower power up, or from a Fire Piranha Plant. This giant fireball transforms all enemies encountered into coins.

Fireballs return in Super Mario Galaxy 2, acting as they did in its predecessor, though Magikoopas instead spawn Goombas. Prince Pikante also shoots fireballs and coconuts in his battle.

Fire Mario reappears in Super Mario 3D Land, acting as it does in the 2D Mario games. The fireballs thrown bounce off walls and fizzle out after two seconds. Fire Piranha Plants also spit fireballs.

Fire Mario shooting fireballs into a pipe to get coins

Fireballs return in New Super Mario Bros. 2 and behave as they always have. There is an extra gimmick where Fire Mario can shoot fireballs into certain pipes and coins and other items (like Mega Mushrooms) can come out the other end.

In the Bowser's Fury campaign of Super Mario 3D World + Bowser's Fury, fireballs that make contact with the water surrounding Lake Lapcat will be put out.

Fireballs return in Super Mario Maker and Super Mario Maker for Nintendo 3DS due to the return of the Fire Flower item and enemies such as Fire Piranha Plants. Yoshi can also swallow fireballs from enemies that shoot them, or get fireballs from fire obstacles such as Fire Bars or Burners. Additionally, the Fire Koopa Clown Car, an object released via a software update on December 22, 2015, has the ability to shoot fireballs from its mouth, and Fire Flowers give it a triple spread-shot. A charge can create larger fireballs, which can destroy blocks.

Fireballs make their debut in the Mario Kart series in Super Mario Kart, where Bowser would drop these items and touching them would make the driver spin out. Unlike other laid down items such as Banana Peels, however, they move around a bit on the course.

Artwork of a Fireball from Mario Kart: Double Dash!!.

Fireballs reappeared in Mario Kart: Double Dash!!, where they are the Special Items of Mario (and Petey Piranha and King Boo, due to their ability to have any special item). Luigi's is a Green Fireball, but it acts the same. When the special item is used, five fireballs will be launched into the racetrack, hitting other drivers and causing their karts to spin-out. These fireballs are capable of ricocheting off walls. However, after a short amount of time, the launched fireballs will fizzle out.

In Mario Kart Arcade GP DX, Fire Mario's special item is the Double Fireball, which allows him to throw two Fireballs rather than one.

Fireballs also appeared in Mario Kart Wii, where they could only be seen in the 2nd Competition of March 2009. Here, Dry Bowser would spit out fireballs to attack the player. He would either fire three fireballs backwards or one fireball forward, depending on the player's racing position. 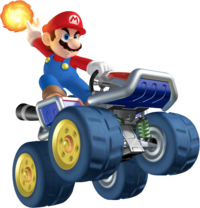 Artwork of Mario preparing to throw a fireball in Mario Kart 7.

Fireballs appear in Mario Kart 7 where they are used as a special weapon. They can only be used if the Fire Flower item, which allows the racers to shoot fireballs forwards and backwards, is acquired. A racer hit with a fireball loses a single coin. The item lasts until ten fireballs are thrown or for ten seconds.

The Fireball is Mario's Star Skill in Mario Superstar Baseball. When pitched with, the Fireball sets the ball on fire and is thrown as a fastball with extremely high velocity and very little movement. Compared to Luigi's equivalent Green Fireball, it has slightly higher velocity and lower movement, matching Mario's specialties as a pitcher. When batted with, the Fireball also sets the ball on fire, hitting it as a fast, low line drive to the outfield. Players who attempt to catch the ball are burned, stunning them for a short time.

In Challenge Mode, players must purchase the Red Fireball item in order to use this skill.

Mario's Fireball icon is the same as Luigi's colored red, even keeping the L in the cap.

Fireballs reappeared in Mario Super Sluggers. Like in Mario Superstar Baseball, it is used as Mario's Star Pitch, though Luigi is given a different Star Pitch. Just like in the predecessor, Mario will throw the baseball at a fast speed, which makes it harder for batters to properly hit it. However, unlike some other Star Pitches, the ball will still be able to travel a far distance if the player hits it with good timing. This makes it possible to get home runs with this Star Pitch since it does not affect how far the ball can go when hit. 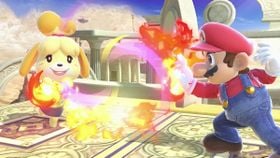 Fireballs appear as the standard special move used by both Mario and Luigi throughout the Super Smash Bros. series. Mario's Fireballs are red and affected by gravity (meaning they bounce against the ground), while Luigi's Fireballs are green and shoot straight no matter what, unless it ricochets off of something in front of Luigi. Kirby can also use the Fireball move once he has sucked up Mario or Luigi, and the color and performance of the Fireball are according to which Mario Brother he has sucked up. In Super Smash Bros. Brawl and Super Smash Bros. for Nintendo 3DS / Wii U, Yoshi can spit single fireballs in his Final Smash form.

In Super Smash Bros. for Nintendo 3DS / Wii U, the first custom variant of Mario's Fireball is Fast Fireball, in which the fireball travels directly forward at high speed but doesn't cause knockback and deals less damage. The second is Fire Orb, which fires a larger but slower fireball that moves similarly to the standard Fireball but can hit multiple times. The custom variants for Luigi's Fireball are Bouncing Fireball, which behaves like Mario's standard Fireball, and Ice Ball, which moves more slowly but can freeze opponents.

In Super Smash Bros. Ultimate, both Mario Brothers' Fireballs remain unaltered, aside from visual improvements, including brighter, flashier particle effects, as well as the appearance of smoke. However, Mario's Fireballs can now hit multiple times when used near opponents, just like the Fire Orb custom variant from the previous game.

In the tutorial battle with Bowser, Bowser only attacks Mario using his Fire Breath. As Rookie, he also spits fireballs alongside throwing hammers, similar to how he attacked in the original Super Mario Bros. Bowletta, a transformation between Cackletta and Bowser, also tries to breathe heavily and, after a few seconds, tries to breathe massive fire to defeat the Mario Bros. which can be done by dodging. Additionally, fireballs also appear during the final battle with Cackletta.

In Mario & Luigi: Partners in Time, the Bros. Flowers is one of the Bros. Items that allows Mario, Luigi, and their baby counterparts to throw fireballs at the enemies during the battle. Blazing Shroobs, found in Thwomp Caverns, the Shrooboid Brat and Elder Shrooboid can also attack using fireballs.

In Mario & Luigi: Dream Team, the Fire Flower returns as a Bros. Attack, which once again allows Mario and Luigi to throw fireballs at the enemies. The Luiginary Flame Luiginary Attack also involves the use of fireballs to damage all enemies, and the Fire Bros. also attack by using fireballs.

In Mario & Luigi: Paper Jam, the Fire Flower once again returns as a Bros. Attack which makes the bros throw fireballs at all enemies. These fireballs deal critical damage to Paper enemies.

Fireballs only appear as uncommon enemy attacks. Volcannons shoot them from their erupting tops, and the Shake King can drop waves of fireballs during his battle.

Fireballs appear in The Super Mario Bros. Super Show! They are used by Fire Mario (known as Super Mario in the show). The episode, "The Fire of Hercufleas" introduces the Great Balls of Fire, very powerful fireballs that can damage a wall.

Fireballs also appear in The Adventures of Super Mario Bros. 3. Once again, they are used by Fire Mario. The episode, "Princess Toadstool for President" includes the song, "Great Balls of Fire," which is a real song. Fireballs are also produced by Fire Chomps and Fire Snakes.

Fireballs reappear in the Super Mario World television series. They can be used by Fire Mario and Bowser Statues.

Fireball coverage on other NIWA wikis: