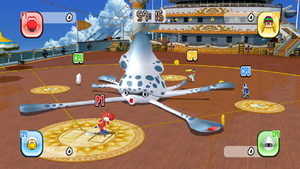 Blooper Baserun is a minigame from the game Mario Super Sluggers. It is held on the Daisy Cruiser court.

Players compete to try to collect the most coins within 60 seconds. However, they have to avoid Gooper Blooper's tentacles during the process. Coins, money bags, and treasure chests give the player a certain number of points. A Super Star also appears at times. The player can grab it to turn invincible temporarily. They can also steal points from opposing players at that time.

As the player advances through difficulty levels, the opponents also become more difficult.

The motion aspect of the Wii Remote control is not used in this minigame.

After the player clears all three difficulty levels, they can play Special Mode, where the player tries to earn the most possible points within 60 seconds.