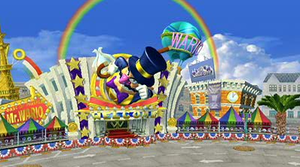 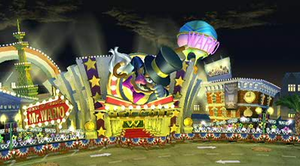 Wario City in the daytime (left) and nighttime (right).

Wario City is a baseball field in Mario Super Sluggers that was built by Wario. The field is set in the middle of a bustling city, with a large billboard (disguised as a building) featuring Wario's head popping out of the front. The manholes on the stadium occasionally shoot out water, in an attempt to knock players out. There are also arrows located across the outfield. If a ball lands on one, it will bounce in the direction of the arrow. Also, the center field is a bit shallow. The stadium's obstacles and graphics change at night. During the nighttime, when the ball hits an arrow, it is launched further than during the day. This stadium seemingly resembles New York City or Las Vegas and may be a reference to Diamond City.

It is home to the minigame, Gem Catch.

In the intro the ball flies to a manhole cover in Wario City. Wario attempts to pick it up with his hand, but the manhole shoots out water, drenching Wario and stunning him.