DK's Hideout (also called the Basement) is a hidden floor in Mario vs. Donkey Kong 2: March of the Minis, unlocked after completing the Roof. It is located in the basement of Super Mini Mario World and contains two levels. Both levels are hidden optional battles against Donkey Kong, and both require a certain number of stars to be accessed. B1 requires at least 40 silver or gold stars, while B2 requires at least 40 gold stars.

Both levels are very similar to the boss battle against Donkey Kong on the Roof. Each level is referred to as a Hidden Boss, and each plays a rendition of the "How High Can You Get?" theme from Donkey Kong before beginning. Neither of these battles are scored or ranked with a star. 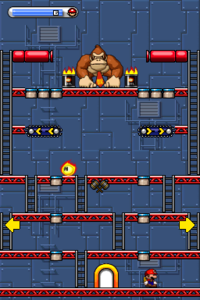 In this level, Donkey Kong is surrounded by two oil cans, which spawn Fireballs that fall onto the girder structure below and can only be defeated by a Mini Mario with Hammers. The level also features bolts that are removed when a Mini Mario walks over them. To defeat Donkey Kong, the Mini Marios must climb the ladders on either side of the level to reach the six bolts next to Donkey Kong's platform. After a Mini Mario removes one of these bolts, the Mini Mario falls onto a conveyor belt and exits the area. After all six bolts supporting Donkey Kong are removed, he falls and is defeated.

After completing B1, a unique victory screen is displayed. A version of this screen without text is also unlocked in the Gallery from the Showroom. 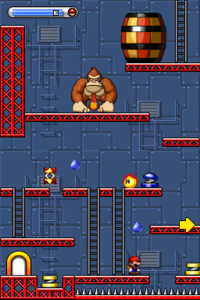 In this level, Donkey Kong remains idle on a girder on the top of the screen, while spiked springs spawn from his position and bounce towards the girder structure below. Two Fireballs also spawn at the beginning of the level without being produced from an oil can. These Fireballs cannot be defeated. The level features several ladders, as well as two Yellow Springs and one Blue Spring. Water drops occasionally rain from the ceiling, similarly to Boss Game 5. If a Mini Mario comes into contact with a water drop, the Mini Mario gains a shield around itself, granting it invulnerability from Fireballs and spiked springs and allowing it to walk on Spikes without being destroyed. The shield eventually disappears on its own after the Mini starts flashing red. To defeat Donkey Kong, the Mini Marios must reach the massive barrel above Donkey Kong. When a Mini Mario reaches the barrel, it pushes it slightly, then climbs up the ladder next to it and exits the area. After 6 Mini Marios push the barrel, it falls on Donkey Kong, defeating him.

The final movie in the game, titled Musical, plays immediately after completing B2. It is unlocked in the Showroom if B2 is completed for the first time.