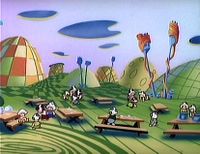 “I think we finally found a place that could make me happier than Brooklyn!”
—Mario, The Pied Koopa

Pastaland[1] (also spelled Pasta Land[2]) is an area from The Super Mario Bros. Super Show!. It is first seen in the episode "The Pied Koopa", and is revisited in the episode "Mario and the Red Baron Koopa".

Pastaland is named for the fact that it is the only place where cooked pasta, such as spaghetti, pre-twirled on huge forks, somehow manages to grow out of the ground. Additionally, many areas of the ground resemble a red and whited checkered tablecloth, giving Pastaland the atmosphere of an Italian restaurant. However, given the nature of the two episodes that take place in Pastaland, it appears to be based on Germany.

In the center of Pastaland is a village inhabited by Mushroom Folk, who make a living harvesting their local crops. As spaghetti is abundant in the area, it is most likely a staple in the diet of every villager. The mayor of Pastaland is Mayor Fettuccine.

In another area of Pastaland is the castle of the Pied Koopa. It is surrounded by a moat inhabited by Trouters, and like any Koopa castle, houses a large dungeon.

Pastaland is apparently technologically behind, as Koopa states that "radios haven't been invented yet" there.

If one can get to the sky directly above Pastaland, they'll reach Cloud Land, where Sam Shalam's used flying carpet lot can be found.