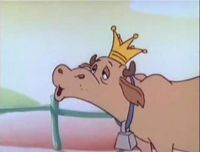 The Royal Cow is a large, brown cow wearing a crown which was once the pet of Princess Toadstool.

It is later revealed that Mario and Luigi had, in actuality, traded the Royal Cow for three small garbanzo beans; though Toad had originally planned on traveling to Dealin' Delbert's cow lot to get the Royal Cow back, he, along with Princess Toadstool, Mario and Luigi, are sidetracked by a giant beanstalk which had grown in their yard; the Royal Cow is subsequently never reclaimed.