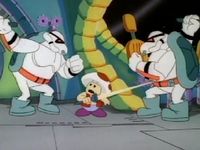 Stormtroopas are Koopa Troopas and Super Troopas that are parodies of the Imperial Stormtroopers from the Star Wars franchise. Stormtroopas only appeared in The Super Mario Bros. Super Show! episode "Star Koopa", where they followed the orders of Darth Koopa.

In "Star Koopa", Darth Koopa, having successfully captured the Flying Pizza onto his Koop Star with a tractor beam, orders his Stormtroopas to seize Mario, Luigi, Princess Toadstool and Toad. Although the Stormtroopas attempt to fight against the four heroes with Lightplungers, they loose, and rely on Darth Koopa to succeed for them.

Stormtroopas appear later on, this time piloting their own Starfighters, to fight off Mario and his friends, who try to breach Koop Star in Mushroom Starfighters. However, the Stormtroopas are unsuccessful in stopping them, allowing Mario to blow up the foundation of Koop Star, destroying the entire spacecraft before its Birdo Ray is able to destroy the Mushroom Planet.